Objects are magic - some musings

What's the point of objects? Objects are magic.

That is the topic a group of Swansea MA students will be discussing tomorrow. As part of an MA module in which they will learn about how to prepare and deliver an object handling session (thinking about preventative conservation, museum aims and ethics, evaluation, as well as researching the objects). Tomorrow the students and I will be considering why objects are important and particularly, object-centred learning.

Object-centred learning is something that museum curators inevitably think is both vital and neglected. Of course, it is vital if you want a job in museums. The 2010 CIPEG resolution stated: "Whereas CIPEG has recognised that many students no longer receive object- and materials-based training in Egyptology and consequently do not have an appropriate professional knowledge to enable them to work in Museums with ancient Egyptian Collections and that this tendency has been identified in many other museum-relevant disciplines from the sciences to art-history; Accordingly CIPEG resolves to urge ICOM members and supporters to appeal to their colleagues and those in other appropriate institutes and organisations to intensify art-historical and object focused teaching as an essential part of the curriculum for the relevant sciences, social sciences and humanities disciplines". [For those interested in CIPEG, this is the link: http://cipeg.icom.museum/]

Additionally, object-centred learning is something which can bring the past to life, in a different way from traditional learning. So, what can you learn from objects that you can't learn from text? Of course you can't simply divide up objects and test quite so simply - texts are often written on objects. Also, the traditional way of teaching, using text and non-text, may obscure the real differences between objects and texts. So, texts are traditionally studied separate from context but the importance of context in studying artefacts is known to all first year undergraduate students. But this difference is one of tradition, it doesn't have to be this way, so it isn't a real difference. To me the differences between text and non-text are that:

And, these differences lead to others. So, for example, the very real appearance of artefacts, and their ‘magical contagion’ properties, mean that being in close proximity to ancient objects makes people feel some direct emotional involvement with the past. It's a bit like touching a holy relic. This ‘magical contagion’ (a term used by Nemeroff and Rozin 2000*), can be seen in the way that people will avoid drinking out of a cup if they are told it once contained poison ­– even if that poison has since been thoroughly cleaned out. The contact an object once had with another world enables the otherworld to be ‘magically’ brought into the present world. This leads on to the almost spiritual nature of artefacts. They are almost inexplicably special, but I suppose I would say that wouldn't I? Sometimes museums are criticised for being too like churches. Perhaps they should celebrate their similarity?

What do you think?

*Nemeroff, C. and Rozin, P. 2000 The makings of the magical mind: the nature and function of sympathetic magical thinking. In K. Rosengren, C. Johnson and P Harris (eds.) Imagining the Impossible: the development of magical, scientific and religious thinking in children (1-34). Cambridge University Press.
Posted by Unknown at 07:24 No comments: 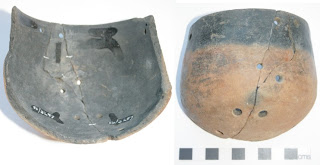 On Wednesday night the Friends of the Egypt Centre invited Renée Friedman to Swansea to talk about Hierakonpolis and the animal burials there. It was, as predicted, a brilliant talk.

While in Swansea, Renée also took the opportunity to look at the Egypt Centre stuff excavated by Mond from Armant cemeteries 1600, 1700, 1800 and 1900, particularly the Badarian pottery. It's always useful to have researchers visiting our collection as we get to know more about our own artefacts. I had long been amazed by our material from Armant, particulalrly the incredibly fine-walled Badarian stuff, much better made than later material. While it has been on my to do research list, it probably would never have happened. The list is somewhat long! So, I am really happy that Renée found us. She explained that our Armant material was important as it was a site which not only had A-group ('Nubian') and Pan Grave (later material in the Nubian tradition) material and Badarian pottery but also the mysterious 'Saharan' sherds which no one knows a great deal about. We have possibly the most northern collection of Nubian pottery.

The picture above is one of the pieces of Badarian pottery. The holes are where the piece had been mended. We are hoping that in the future, with  Renée to advise, we may have a small display of the Armant material discussing the different cultural groups. Meanwhile, the piece of pottery shown above and a few others from Armant are integrated into our existing display.
Posted by Unknown at 01:36 No comments: