Ammut- not such a bad girl? 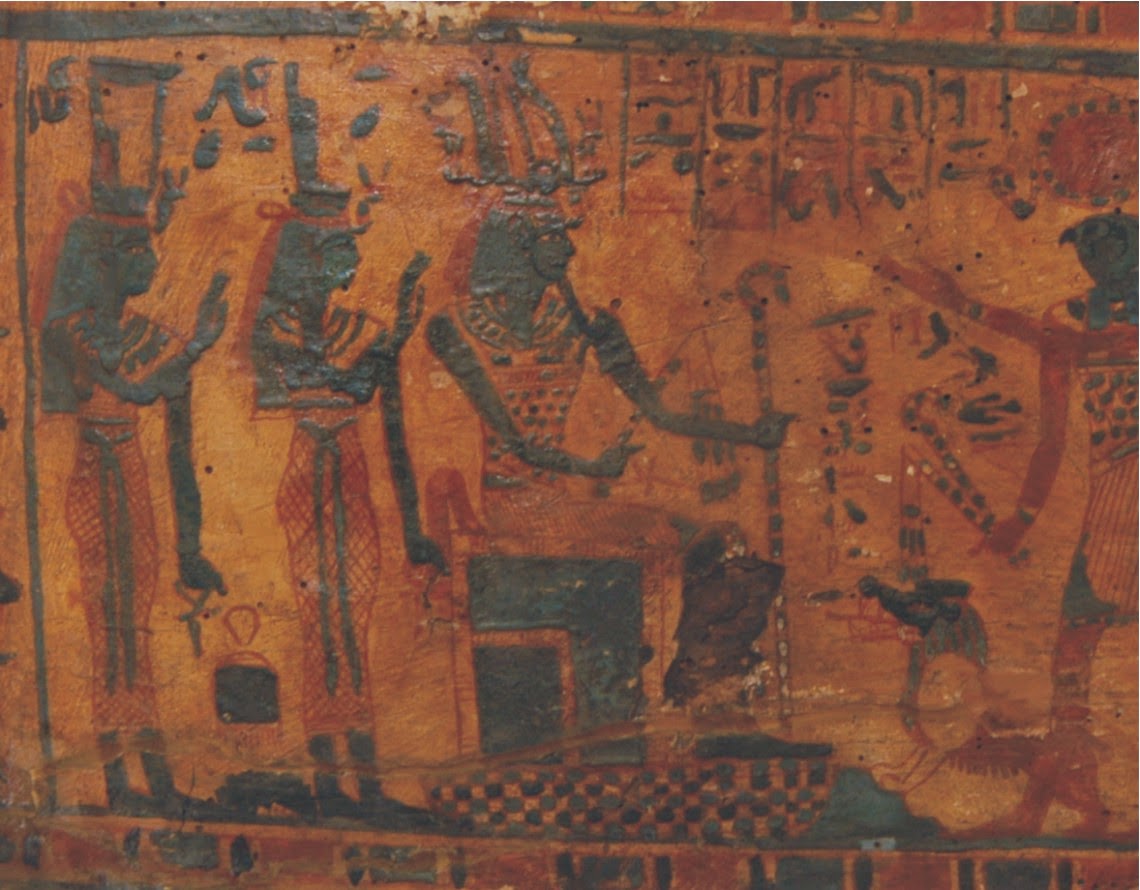 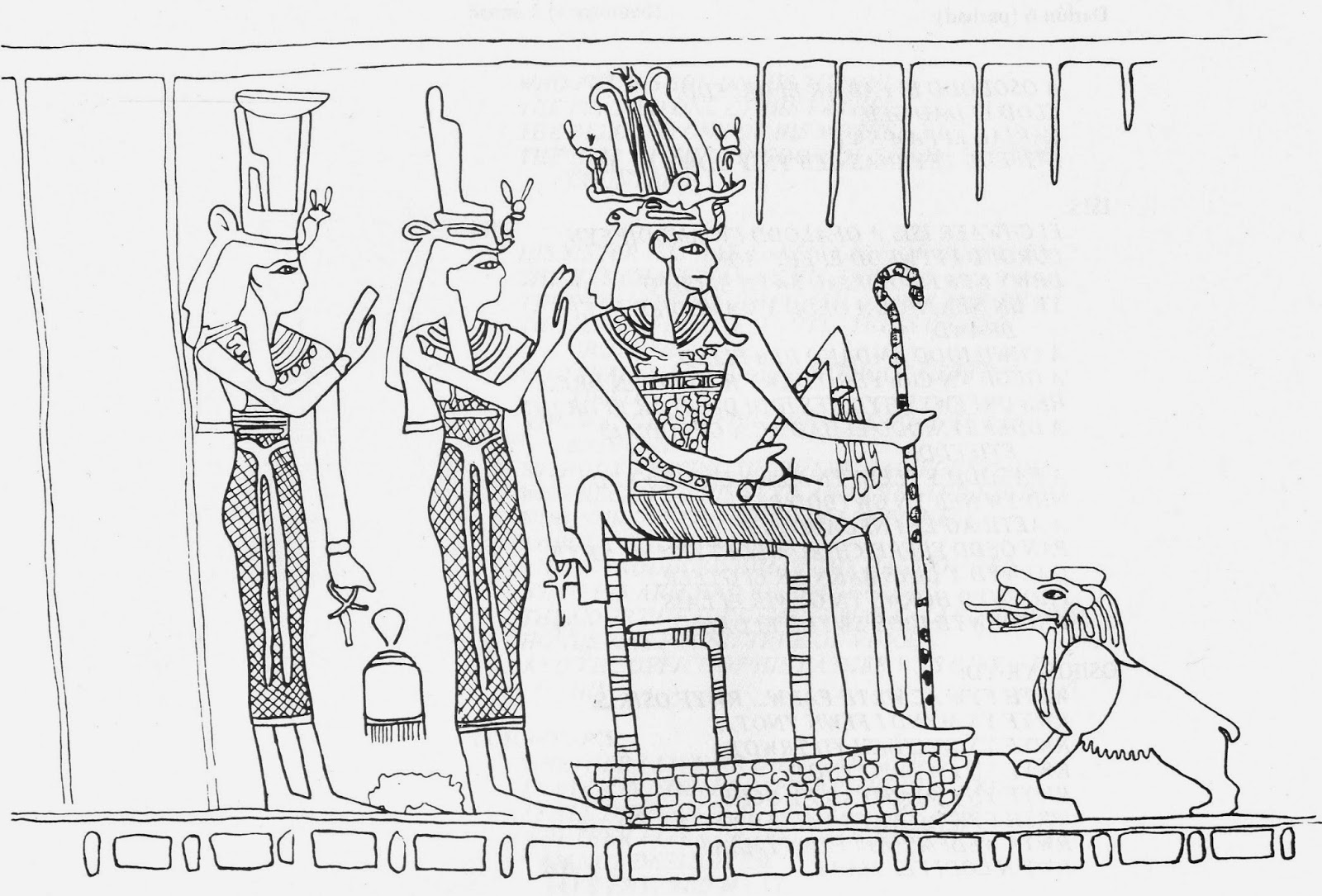 Poor old Ammut, the Devourer, gets such a terrible press normally. She eats the hearts of the deceased who are bad people so that they don't get to go to 'heaven'. But was she really all bad?

You can see her on the steps of the throne of Osiris here (the b/w image is easier to make out). She has the head of a crocodile, the hind part of a hippopotamus and the middle part of a lion. Her teats show she is female. She also wears a modius, like Egyptian royal women. These picture are taken from out 21st Dynasty coffin (you can find out more about it here). She is waiting for the judgement from Osiris, does she get a nice tasty heart, or not?

However, there seems to have been more to her than simply a blood-crazed glutton of hearts. Strangely, perhaps, one of the beds in the tomb of Tutankhamun is in the shape of Ammut and he is called 'Beloved of Ammut'. Such beds in tombs would have been associated with resurrection.

Additionally, she often appears on 21st Dynasty coffins in scenes of Osiris' triumph over death, a scene that could also be said to be associated with resurrection.

Here she is on our coffin in the mound scene, where Osiris sits atop, reborn. Can you see her, front paws on steps? She is in the Amduat, the otherworld.

It seems however, that for the Egyptians, the destruction of enemies was necessary for rebirth, so Ammut is not so bad after all.

In some ways (her hippo links) she seems similar to Taweret, normally thought of as a good girl, but sometimes not so good (there is another tale there).

This week is science and engineering week (we have plans to celebrate at the Centre) and I have just been reading Ian Shaw’s Ancient Egyptian Technology and Innovation (Bloomsbury 2012) and thinking about how it fits with what I know about Egyptian lithic (i.e. flint) technology.

So, after a long time of know blogging, a few thoughts on Egyptian technology and of course their lithics! The Egyptians used flint tools much later than others in the region. Tillmann (1999) drew up a comparative table of flint use for Egypt and adjoining regions. The detail could be debated. For example, Tillmann stated that flint working ceased in Greece c. 1500 B.C. However, a study by Runnels (1982) showed that obsidian and chert was used until the 10th and 9th centuries BC. Obsidian was used until 400-300 BC. Part of the difficulty lies in differentiating between a lithic and metal using society when there is a continuum, not dichotomy. For example, threshing flints were known in the Levant until the 20th century. Yet, this society would not be considered ‘stone-age’. However, Tillmann’s general conclusion that flint was used in Egypt until a surprisingly late date is correct, in fact it was commonly used into the New Kingdom.

Does this mean that in some ways they were backward? I would say ‘no’. Flint is sharper than metal, it is lighter (so arrows tipped with it will go further) and is ubiquitous in Egypt as far south as Thebes. Even the fact that it breaks easy may be seen as an advantage. A flint-tipped projectile point breaking in a body is more likely to kill than something which can be pulled cleanly out. The serrated quality of bifacial tools further enhances cutting and their irregular surface might additionally encourage hemorrhaging. Modern hunters sometimes draw a file across metal arrowheads to produce the same effect. One might almost say it is such a great material why did anyone ever use metal? I would guess because metal was pretty, great for making sparkly things.

It’s sometimes said that the Egyptians used flint for a long time because it was bound up with their ideology. To summarize, flint was associated with meteoric iron, it was described in ophidian terms (like the uraeus), it is associated with Seth and Thoth, the fiery daughters of Re, with doorkeepers of the underworld and the northern sky, it is a perfect celestial weapon against the enemies of Re. All this ideological stuff continued into the Ptolemaic Period. Maybe because flint was ideologically important, it was used for a long time. May be, or may be it was used because it was so good (I have even wondered if flint went out of use in graves because arsenical copper was shinier than it, and shininess was an important ideological facet - See Graves-Brown 2013).

If the former, does this make the Egyptians strangely illogical; in thrall to religion? Again no! It has been shown time and time again that people will rarely take up new ideas unless it fits with their own ideologies. Even in the history of weaponry, which one might think was purely logical, development has been guided by ideology, including such unlikely or seemingly illogical areas as aesthetics (van Creveld 1989, 75-76).