Thank you Griffith Institute -it's amazing what you can find out online!

Last term we had a few MA students in the Egypt Centre looking at 'real' hieroglyphs (instead of ones in books). One of the things we looked at was the Tjenti stela, a 5th Dynasty lintel from Saqqara in our upstairs gallery. As we were going to look at this I tried to find out a bit more. I'm no expert on Saqqara, the 5th Dynasty, or hieroglyphs but was really lucky. An online document from the Griffith Institute which gives some useful background information, and also from the Porter and Moss (Topographical Bibliography) volumes now online.

But first here is a pic of the lintel:

And here is a line drawing of it:

This is what we made the translation out as: An offering which the king gives and which Anubis Lord of the sacred Land gives, so that he may be buried in the beautiful and great land of the west. Voice offerings of bread and beer, oxen and fowl on the festival of every day for the Overseer of the Craftsmen, Tjenti. His wife's name is given behind the couple as Ni'ankh-hathor

But I am puzzled by the sign underneath the bread, bottom right. Is it a variation on the sign for cloth. Clearly I need to do more research here.

Back to its history. Some time ago, an outside researcher drew my attention to the Amherst collection, which is online at the Griffith Institute. The key information regarding the stela's history as belonging to the Amherst and Portalès-Gorgier collection can be found online at: http://www.griffith.ox.ac.uk/gri/gif-files/Amherst_03.jpg The document also states it was sold as lot 194.

But what did I find out purely by googling:

The Topographical Bibliography (III.2.762) mentions that a lintel of Thenti and his wife Ni'ankh-hathor appears in the Wilkinson MSS xiii.71 and Gardiner Notebook 66 p. 18. The Gardiner Notebook is that list of Amherst artefacts compiled by Crum (Galán, J.M 2000, Brief Communications, JEA 86 p.148, footnote 25). I don't know about the Wilkinson MSS. This isn't online so will have to go to Oxford for that.

I  found online that Comte James Alexandre de Pourtalès-Gorgier was a banker and art collector (1776-1855). He created a gallery of antiquities in Paris. After his death, Lord Amherst of Hackney purchased some of his artefacts. This item was resold in the Sotheby Sales of June 13th-17th 1921.

But I'm still not sure about that sign below the bread sign- more book research as opposed to googling needed here! And of course the Wilkinson MSS.

A bit of a shrine with an unknown king 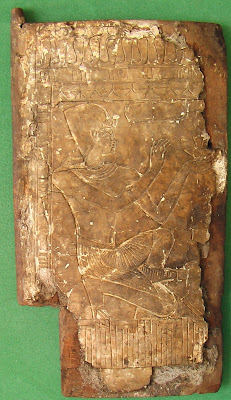 I am trying to find out more about this item. It is number EC485 in our collection and measures 264 by 164 mm. It has been mounted on a piece of wood sometime before it came to us. This is what I have discovered so far but would appreciate it if anyone has any helpful comments, or even parallels. Alexandra von Lieven has given us some very helpful information with regards the style (showing its Ptolemaic date), But further comments are always welcome. 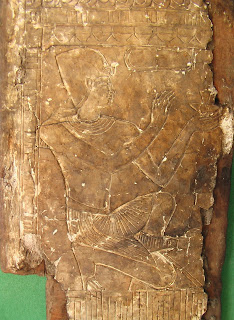 It seems to be the door cover of a (shrine). It is made from wood with modelled gesso (plaster) and would originally have been gilded. The pivot/hinge is on the left hand side. The shrine would have held an image of a god. The decoration shows a king offering to the god within the shrine (who may originally have been depicted on the missing right door leaf). The style of the piece suggests a Ptolemaic date.

The king is kneeling, facing right and offering incense with his left arm. He wears a shendyt kilt and the blue (khepresh) crown. Kushite kings (25th Dynasty) preferred other crowns (Collier 1993) but is brought back by Saite (Russman 1995) rulers (from 664 BC) and used by later kings. It was often worn when the king was shown offering. In front of the king’s head is an empty cartouche. Empty cartouches are relatively common feature in Ptolemaic royal scenes. Above the figure is a pt (sky sign) with a row of stars therein and above that, a row of uraei. Stars are also featured on the Late Period naos of Amasis, Louvre E605). Below the king is a row of doors evoking early royal palace facades (also featured on the naos of Amasis, Louvre E605 and the naos of Darius, British Museum EA37496). This façade decoration is also seen on earlier shrines such as the sides of the small golden shrine of Tutankhamun.

Fragments of other small shrines are known in other museums. These are usually made of wood and inlaid with glass or precious stones (e.g. BM EA37496; Louvre E605). Alternatively, they may be wood covered in gold silver or copper (Hope 1998, 829 fig. 9; Spencer, N. 2006, 4).  Unfortunately, often they are without archaeological context. And, if anyone knows of anymore please can they let me know.

A light shrine, made of wood, seems to have been called by the ancient Egyptians a sH-nTr (Spencer 1984, 114, 139 footnote 167). These seem to have either been used as inner temple shrines or as portable outdoor shrines. Small, light shrines were sometimes reused as coffins for animals (Colburn 2014, 259).

Shrines to the gods were often kept in temples. Usually these consisted of an outer stone shrine and within that a portable wooden shrine with two-leaved doors (though also see Spencer 2006, 4). Such double doors were known as ‘the gates of heaven’. Lorton (1999, 128) suggests that the cult statues from such shrines would have been a foot or so in length. While the doors to stone shrines could also have wooden doors covered in precious metal, the larger size of such shrines suggests that ours is unlikely to be part of an outer shrine.

A naos door with inlaid with glass from the British Museum (EA37496) is around 28cm in length, so of a similar height to this example. Like ours, the king is making an offering and is standing on a surface similarly decorated to ours. However, other shrines, suggest much larger cult statues (Teeter 2011, 43).

Shrines could be erected outside temples for temporary festivals, and placed on wooden barques for processions. Such shrines would need to be lighter than the monumental outer shrines in temples. There are also very small shrine doors known from museum collections which have been interpreted as models. Examples include the gilded wood naos door British Museum EA38255 showing Nakhthorheb kneeling and holding ceremonial basket. This latter measures around 11cm in height.

The shrine itself, as an enclosed box, would have been dark. The opening of the doors of the shrine would have let in the light allowing the god to be reborn and for worship to take place (Finnestad 1985, 94–95). The two doors to shrines imitated the two doors to heaven. It seems likely that the missing leaf in our example would have shown the god (as in the naos of Amasis, Louvre E605).

The object was puchased in 1992 by Sir Henry Welcome at an auction of items owned by MacGregor.

Finnestad, R. B. 1985. Image of the World and Symbol of the Creator. On the Cosmological and Iconological values of the Temple of Edfu. : Otto Harrassowitz.

Fischer, H.G. 1996. Egyptian doors inside and out, In Fischer, H.G. Varia Nova, Egyptian Studies III, The Metropolitan Museum of Art, 91–98.