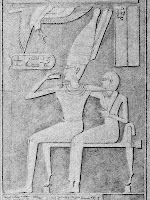 A diversion from my work- but related. Mentuhotep II embracing his wife Sadeh in his temple at Deir el-Bahri (from Naville 1910).

An unusual depiction of a king embracing a woman. Usually, the woman embraces the man. Mentuhotep is also shown embracing Ashayt. Such scenes are rare but not unique. A fifth Dynasty fragment from the mortuary temple of King Sahure shows the king embracing his wife. Embracing can show power relations as well as intimacy - in such cases however, the embracing is usually carried out by the lesser partner.

The temple tomb of Mentuhotep on the west bank at Thebes incorporates the tombs of at least 8 women. They are sometimes said to be his wives, but reality seems more complex.

Depictions of the king embracing do not occur in the 'wives' funerary structures. It has thus been suggested that the so-called 'harem' of Mentuhotep were only his wives for the purpose of cult. They are all priestesses of Hathor and their chapels designed to show the king's special relationship with this goddess.

For more information on this site click here.
Posted by Unknown at 02:14 No comments:

Your right eye is the Evening Boat 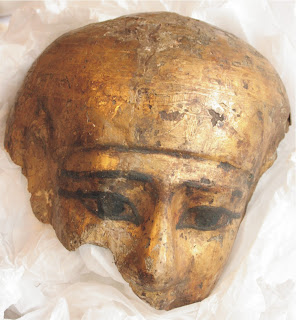 This rather beautiful but very damaged Ptolemaic mummy mask was put on display in the upstairs gallery in the Egypt Centre in 2009. We put it in our metalwork case to show that metal was not just about tools and weapons but also about religion. However, in the last couple of weeks a visiting researcher noticed that there might be something else interesting about it.

The mask is made of cartonnage, that is linen and gesso (plaster). It is covered in gilt. Mummy masks such as this were often coloured with gold gilt because of gold's symbolic importance. The shiny nature of the metal was paralleled in the shiny nature of the justified dead and imbued the deceased with the same quality of shininess. Gold is also an eternal metal which does not tarnish.

We had noticed that the piece also has a wedjet eye on the forehead. What we hadn't paid much attention to was something else, pointed out to us by the visiting researcher. He asked if the mask had an inscription circling the crown. We couldn't really tell from the case, and the piece is damaged. So yesterday, I got off display to have a closer look.

Aha! Our visitor was correct. This is what we saw: 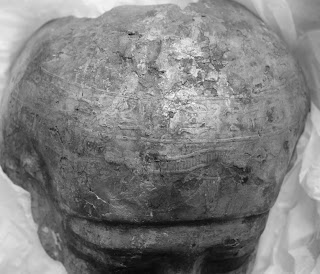 Hieroglyphs could be seen- very faintly. The researcher had suggested either Book 19 or 151 of the Book of the Dead. You might just be able to see, this is part of Book of the Dead 151a. The bit above the brow can be translated as: 'Your right eye is the Evening Boat and your left eye is the Morning Boat; your eyebrows are as the Nine Gods....'.

The text replaces the 'crown of justification', a wreath, often shown on mummy masks. The rest of the spell describes the features of the deceased in godlike terms; your brow as Anubis, hair as Ptah-Sokar, etc. Making the deceased into a mummy was likened to making it into a god, and gods, of course, had qualities of eternal gold.


For information of the Crown of Justification see Christian Riggs 2005, The Beautiful Burial in Roman Egypt. Art, Identity and Funerary Religion pages 81-83.