In the last post I introduced our beaded collars and asked fake or not fake? Well, the individual beads on them are certainly genuine. 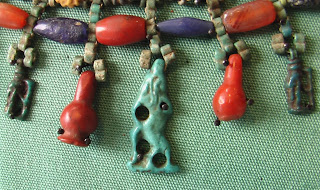 But what about this one? We are looking at close up of one of the collars. The black circles are pins holding the beads in place for display in the museum. Have a look at the centre amulet here which is made of blue faience. It shows a figure turned to the right, holding the root of its tail in one hand and with its other hand to its breast. The figure has loose disevelled hair and a human face. It's genuine, but what is it? My predeccessor Kate Bosse-Griffiths believed it to be a New Kingdom, female Bes- A Beset.

But, do such things exist? To be honest I'm still looking and thinking. So this is just what I think so far. For a bit more on Egypt Centre Bes things click here.

The term 'Bes', of course covers a whole load of different daemons to whom the ancient Egyptians gave lots of names. One of the best known is 'Aha' the fighter. Female Bes's (Besets) seem to have been around in the Middle Kingdom, at least an article by Wegner (2009) has convinced me of that. You also get Besets in the Graeco-Roman Period. However, most Egyptologists don't believe they existed in the New Kingdom, again I'm not so sure. There are loads of male Bes depictions at Amarna.

As a bit of an aside, there is a similar, evil, male daemon in a New Kingdom Book of the Dead (Ratié 1968, 10-11, pl.13). Sorry I can't show a picture but its copyright. The one in the Book of the Dead is however, clearly a male (it has a beard), but it has the same pose as ours. It seems to be threatening to take the heart (normally Bes protects the heart). But one would hardly wear an amulet of such a threatening being? There are also one or two amulets of male Bes's in this pose, e.g. Fitzwilliam 5995-1943. Maybe these male Bes's in a similar pose are irrelevent.


In support of ours being an actual female, the females, tend to have human faces, and the hair of ours looks more female than male. But are their other examples? So far I haven't found an exact parallel but Brunner-Traut (1979: 31, plate V) shows EGA 4299 an undated ostracon but probably 19th Dynasty, of Bes with breasts. These are not 'manboobs' but proper, female type breasts. Again sorry for lack of pics. Copyright again - the object is in the Fitzwilliam.


So I am undecided. Kate Bosse-Griffiths mentioned two parallels in other collections (one in the Fitzwilliam and one in the Kofler-Truinger collection) but as yet I have been able to obtain decent pictures.


There will be more on this topic!

PS if you are interested in the figures with staffs, either side of 'Beset', there is a little bit on them here.

Addendum:
Since I wrote this a kind person drew my attention to a New Kingdom depiction of Bes with 'Hathor-like' curls on a headrest in Berlin (11625).

Here is the link:


Wegner, J. 2009. A Decorated Birth Brick from South Abydos. New Evidence on Childbirth and Birth Magic in the Middle Kingdom. In Archaism and Innovation: Studies in the Culture of Middle Kingdom Egypt edited by Silverman, D.P., Simpson, W.K. and Wegner, J., New Haven and Philadelphia, 447-496. You can download this online from: http://academia.edu/894376/A_Decorated_Birth_Brick_from_South_Abydos_New_Evidence_on_Childbirth_and_Birth_Magic_in_the_Middle_Kingdom

Did you know we have over 200 items from Amarna in the Egypt Centre. If you want the full list just have a look on our searchable catalogue at: http://www.egyptcentre.org.uk/


Generally the most popular with our visitors are the beaded collars (one shown below). Are they, or are they not fakes? They are made up of beads of faience and semi-precious stones.

The 4 collars came on the art market in the 1880s the same time as the royal tombs at Amarna were being robbed. They were purchased by Lady Berens and then later came into the hands of Henry Wellcome, and finally the Egypt Centre.


The beads are very clearly Amarna-ish and certainly genuine, but could the beads have been gathered together and strung by a clever forger? One might say they are too good to be true.


The thread used to string them is hand-spun linen, which, one might think would not have been the obvious choice for a forger working at a time when machined cotton was available. However, the forger may have been wise to the fact that linen would have been used by the ancients.


We could have the thread radio-carbon dated. This might prove the collars to be fake but it could never prove that they were genuine. It is possible that a clever forger used ancient thread.


What do you think?


Whether the collars are genuine or not the beads are certainly interesting. One of them is very possibly a female Bes- a Beset, but did such daemons exist in the New Kingdom? Some Egyptologists do not think so-I’m not sure. Watch out for the next post!
Posted by Unknown at 03:14 1 comment: 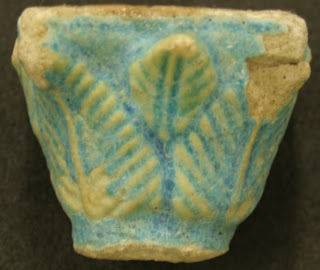 New object just put on display. It is made from faience and is around 4 cm in height. But what is it?

It is in the shape of a capital from a column. Model stone capitals are usually said to be either sculptors' models or votive offerings. Howver, at Middle Kingdom Kahun, Petrie found model columns in stone and wood in situe with either offerings of bread on them, or in one case a put to burn incense.

Of course this is not Middle Kingdom in date. The style of the plant on the column suggests it is Greek or Roman. The fact that it has an indentation in the top suggests to me that it may well be an incense burner. For more, including parallels, click here. 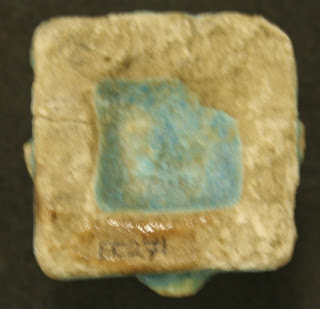 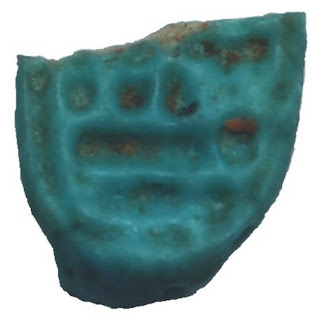 I have been putting this rather tatty looking object on display today. I know other museums have better examples, but it is the only ring bezel belonging to the Amarna female king Nefernefruaten, which I could find in our collection.

A ring bezel is the decorative part of a ring. This object is made from faience (which is a bit like glass). This is one of several ring bezels we have with the name of Amarna kings upon them.

It has one of the several names of the king, more precisely, it shows the name which Egyptologists call the 'prenomen'. Only the nomen and the prenomen were written in cartouches. The prenomen was given to the king when he came to the throne.

So whose name is on this? The name reads as ‘Ankhkheperure-mery-Waenre’, which is the prenomen of Nefernefruaten. It means ‘Living are the forms of Re, who is beloved of the Sole one of Re’ (Ankhkheperure=Living are the Forms of Re; mery= beloved of; Waenre=Sole One of Re).

The identity of this person has long been disputed. That Neferneferuaten was a female king is suggested by the fact that sometimes the name is written to show it is a female form (it isn't here) and sometimes the name has the epithet ‘effective for her husband’. She has been variously identified as Smenkhare, Meritaten and Nefertiti, or even another wife of Akhenaten. The epithet ‘beloved of Waenre’ associated the person with Akhenaten as Akhenaten also had the title 'Waenre'. More recent scholarship suggests that Nefertiti is the most likely contender. Whoever she was, she was perhaps a coregent of Akhenaten and later Tutankhamun.
The names of kings were written on items such as rings to give kingly protection to the wearer.
The bezel was donated to the Egypt Centre in the 1970s from the British Museum. So thank you to the British Museum for perhaps a tatty looking but nonetheless interesting, object. Often the least pretty objects are the most intriguing.
A link to our website with information on the object.