I've been photographing our croc in the Egypt Centre, in readiness for the visit of renowned Egyptologist and anthropologist Jasmine Day will be visiting the Egypt Centre. Our lucky volunteers will receive a free talk from her. 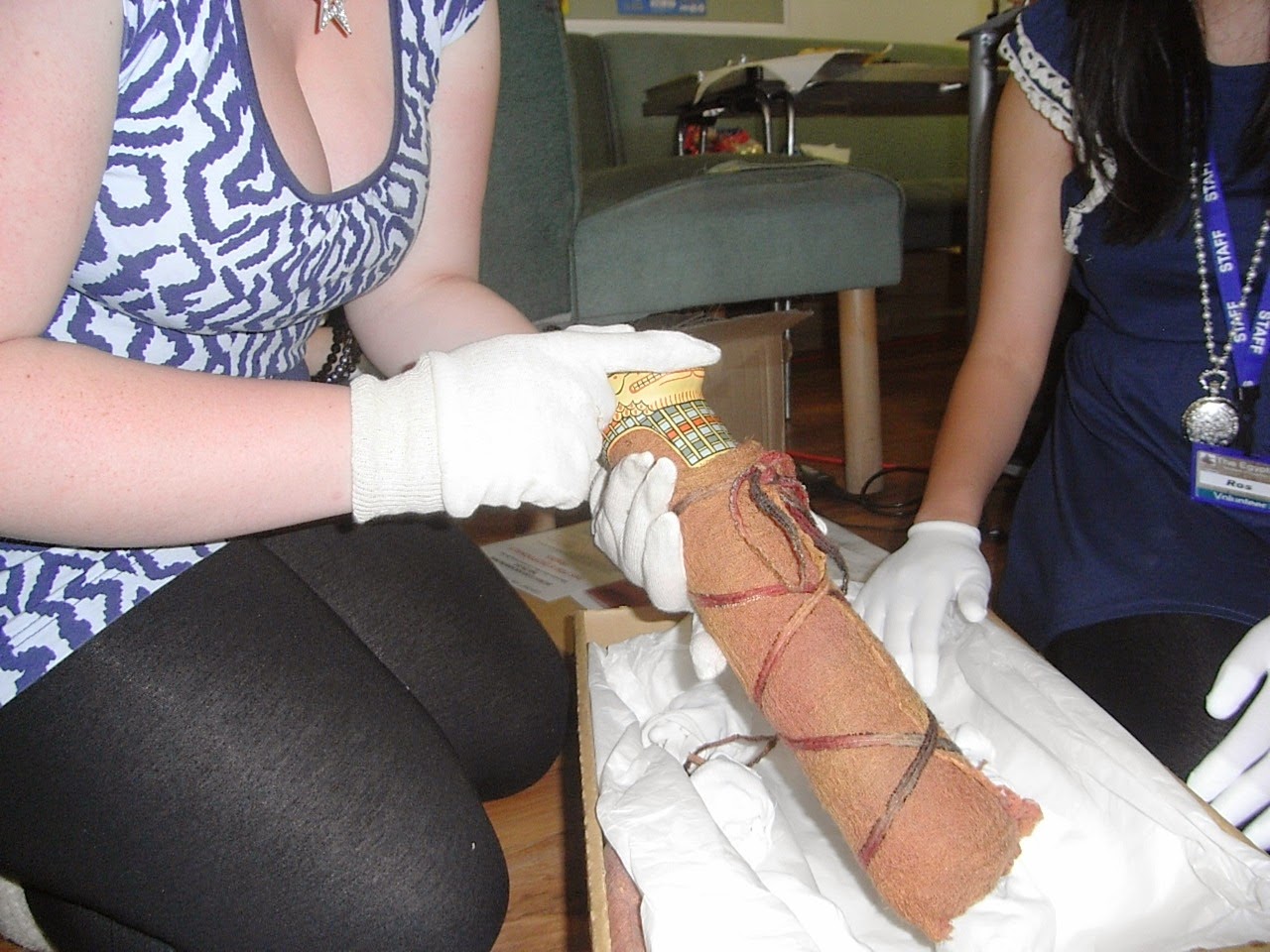 Jasmine is the author of the book The Mummy's Curse: Mummymania in the English speaking Word (Routlege 2006). She has lectured and published internationally..

Jasmine has also long been a supporter of the Centre, so we will be delighted to see her again. She made several of the replica animal mummies which we sell in the shop, and, has made Alex the Cat.

Who is Alex the Cat?. Here he is on the left. We use Alex who is a replica of a mummified cat we have in the collection. Click here to see the original. He is used to explain to children preventative conservation and safe handling
of objects in museums.

Anyway, on Friday, Jasmine is giving us a talk and here is the title and abstract: The Time Machine: The Coffin in Ancient Egypt - The changing face of Egyptian society and funerary fashions can be traced through centuries of development in the design of coffins, sarcophagi and cartonnage mummy casings. Ever conscious of their own history, the Egyptians periodically revived coffin styles dating back to eras well beyond living memory. Like time machines, coffins were intended to magically and physically protect and carry their occupants through eternity – and have indeed transported them into our own time. This is free for our volunteers but we have one or two spaces for non-volunteers for which we will charge £2.

We are feeling excited.

You may be wondering why I've been photographing the croc.  Well, Alex has been so successful that we are also going to do a croc version. Jasmine is going to copy him.

The power of the ugly?

Throughout history and in various cultures ugly beings have often been thought protective. Think of the gargoyles on churches, or even Bes of ancient Egypt. We have two objects we have in the Egypt Centre traditionally called 'grotesques', indeed an old label on one of the items actually says 'grotesque'.  While beauty is in the eye of the beholder, I don't think that they could really be considered ugly. They may not represent standard youthful beauty but a furrowed head and flat nose cannot be considered 'grotesque'. But why the Graeco-Roman fascination with these images? 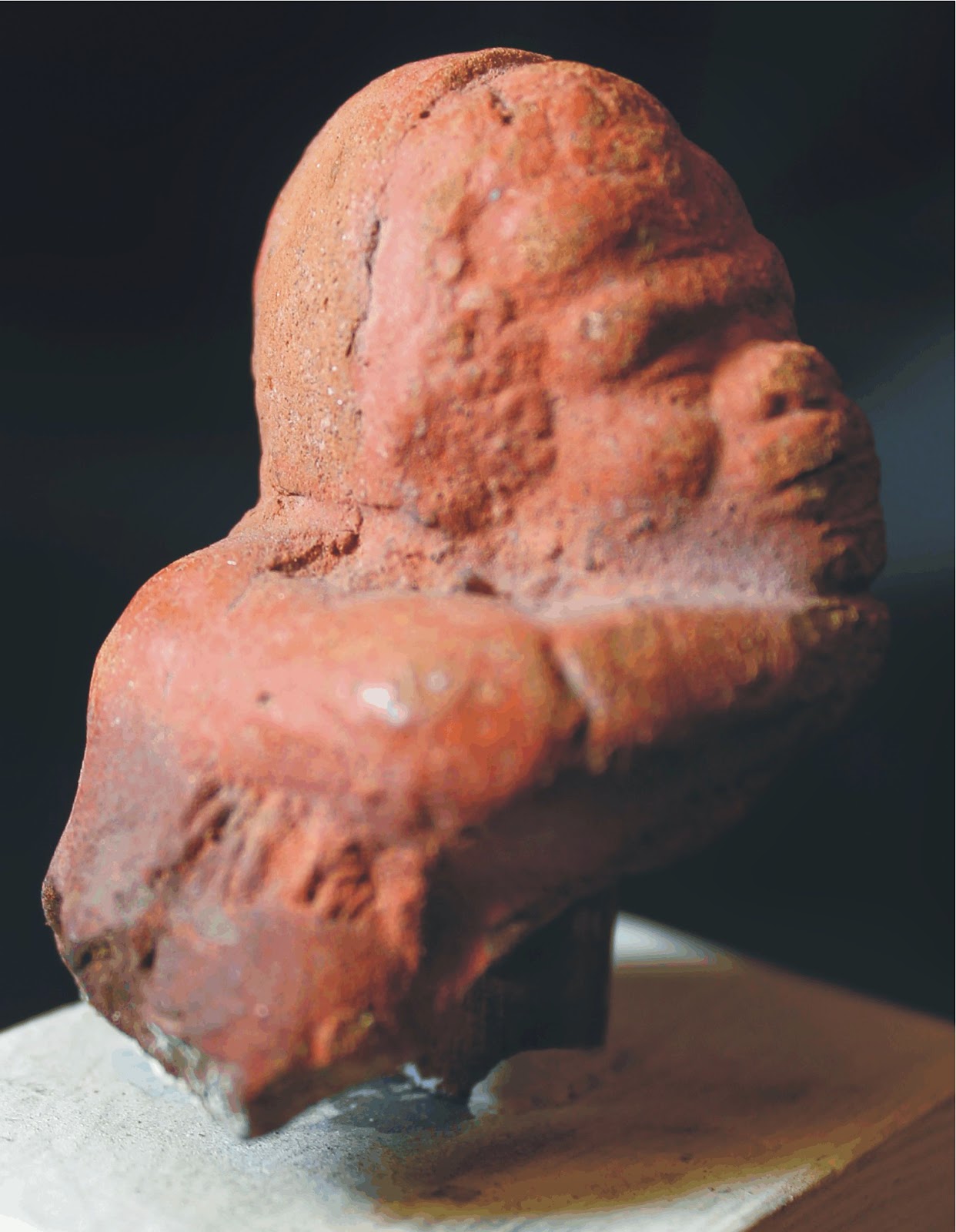 The one above is GR104 which was donated to us by the British Museum in the 1970s. The forehead is furrowed and the nose flat. The eyes appear to be closed. The arms are possibly drawn up under the chin suggesting a squatting figure. 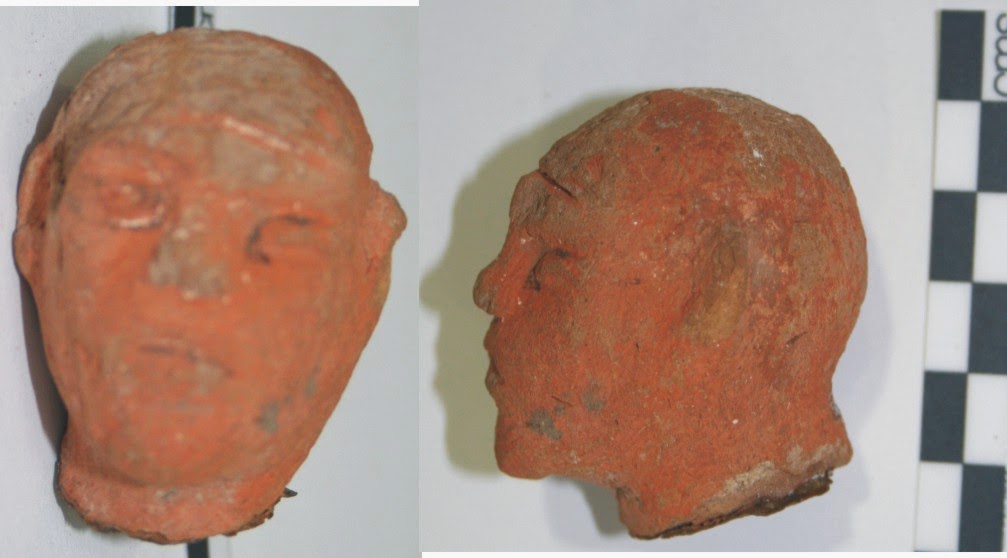 There are parts of moulded terracotta figurines. Very often museums only have the heads. We are not sure if ours are from Greece or Egypt as they are known throughout the Hellenistic world. Egyptian manufacturing sites include Alexandria and Memphis. Egyptian examples tend to be solid and hand-made and ones made in Greece are hollow and mould-made, though this is not a hard and fast rule. It seems that GR1-04 is thus more likely to have been made in Greece and EC1290 in Egypt.

Objects such as these begin in the Ptolemaic Period though continued with Roman control. The visual arts of the Period show a fascination with people exhibiting physical deformities (Muratov 2012, 56 with references) and non-'standard' forms, and these are rightly or wrongly categorized as one group.  They are found in temples and tombs, though some are also found on domestic sites. They are usually depictions of males and have exaggerated features, sometimes of deformities.

Petrie suggested that these may be foreigners though this idea has been discounted (Ashton 2003). It has been suggested that they are influenced by theatrical masks of the period. There use is unclear though it seems that at lease some were votives.

It has long been suggested that such images were considered apotropaic in the ancient world (e.g. Harrison 1903; Wace 1903/4 but also see Muratov 2012, 59 footnote 19 for other references). This has also been suggested for brazier fragments with heads of satyrs, which seem to be related through connection with theatre masks (the Egypt Centre has two examples of these EC1301 and EC1302). This would explain why many are phallic (considered apotropaic) and produced in large quantities, and also why they are placed in temples and tombs. It may be that such heads in Egypt are in the tradition of apotropaic figures such as Bes and satyrs. Or of course, it may be that they represent famous actors of the time who would be depicted with exaggerated, caricatured masks.

Harrison, J.E. 1903. The Ker as Gorgon, Prolegoma to the Study of Greek Religion.

Muratov, M. 2012. “The world’s a stage….”: Some observations on Four Hellenistic Terracotta Figurines of Popular Entertainers. The International Journal of Humanities and Social Science 2.9, 55-65.