Weird things used in the Opening of the Mouth ritual

The Opening of the Mouth ritual was used to bring the mummified dead and also statues 'back to life', or rather to imbue them with some life-like qualities. Most Egyptologists know about the flint knife, the peseh-kef being used for this (please don't confuse this with the fish-tailed knife); which was altogether 'another kettle of fish'!

Here is a pesesh-kef (this example is from the Museum of Fine Arts Boston, 11.765)

Here is a fish-tailed knife from the Petrie Museum (UC10244).

And if you want to know why they are different the best paper is Thomas Hikade's 'Getting the Ritual Right'. You can find it online here. And he has lots of references about the things. I would like to 'talk' more about these because they are flinty, but must move on....

People also know about the model adzes waved in front of the mummy too. Here you can see a detail of a piece of the Book of the Dead in the Egypt Centre showing the priest on the far right waving things at the mummy. The adze is on the top of his heap of magic tools and you can see the foreleg of an ox under that.

And, if you want to know more about this fragment of the Book of the Dead, click here.

Well what about this: 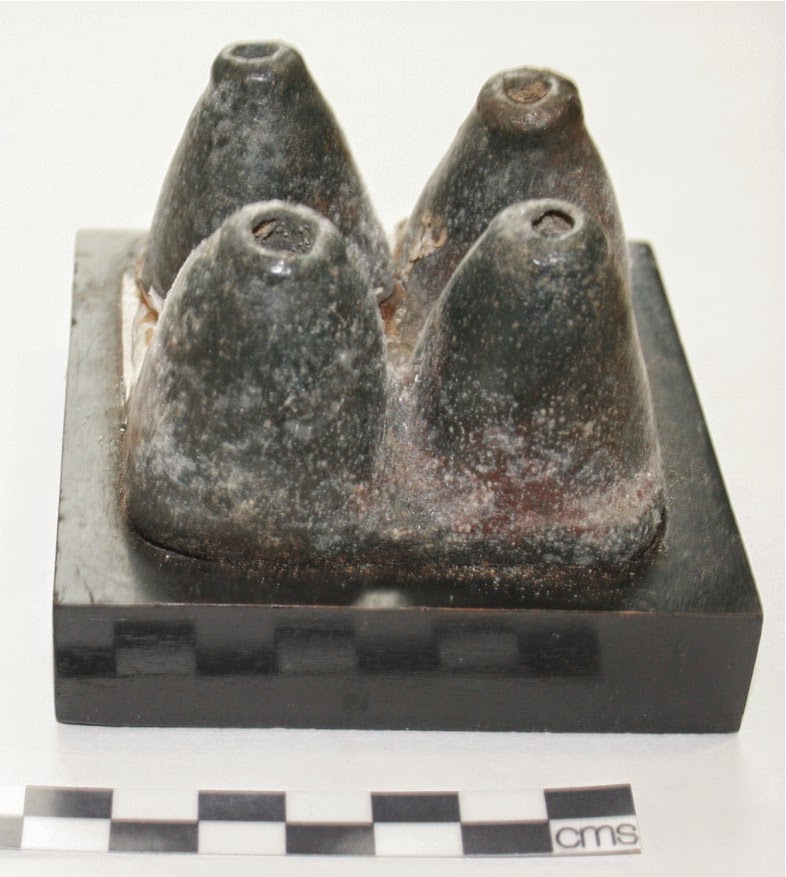 Things like this have proved a bit of a mystery to Egyptologists, and have been considered granaries or even cosmetic containers! However,a few years back I was privileged to hear Silke Grallert talk about them. It seems they were used in the Opening of the Mouth Ceremony from the 26th Dynasty. And if you want to know more, here is the link.

Of course, I can't actually resist flints. So, a picture, not very good I'm afraid of some miniature polished stone knives from a photo I took in Cairo Museum in 2003. They are from the tomb of Tutankhamun. 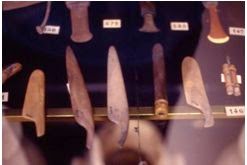 Similar ones were found in KV55. Their context suggests they were part of the 18th Dynasty Opening of the Mouth 'toolkit' put in tombs. Such things aren't listed in texts, or drawn on tomb walls in association with the Opening of the Mouth ritual.
Posted by Unknown at 07:12 No comments:

Email ThisBlogThis!Share to TwitterShare to FacebookShare to Pinterest
Labels: faience, flint, mummy, Opening of the Mouth

Why the green face Ptah? 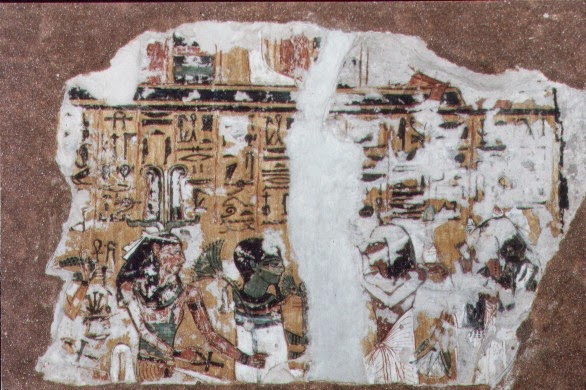 Ptah, the god of craftsmen has a green face. You can see him second from the right on this tomb fragment (more about that through clicking here).

But why the green face? In the literature it is often stated that it is because the green is a reference to the newness of the vegetation growing alongside the Nile after the annual inundation. Indeed he often has the epithet nfr Hr (Lüscher, 246) which fits. Nfr, is often translated as ‘beautiful’ but it has connotations of newness and youth, so a green face could indeed be described as ‘nfr’. The plant association seems to be at least partly correct as Tatenen who is associated with vegetation is also shown green, but then again, he is linked with Ptah.

He is also green as he is in a transformative stage, of becoming a divine form, a mummy. Mummy's were not just dead bodies but something more like statues of gods, indeed, like statues of gods they could be revived through the Opening of the Mouth ritual.

So, Ptah, the mummy is undergoing a transformation? So it would seem.

The whole idea of mummies being trasformed into gods is also made explicit by Chapter 151a of the Book of the Dead. This appears on several mummy masks, including, one of ours, W920. This Chapter describes the face of the deceased in terms of gods and indeed the whole process of mummification was concerned with making the deceased godlike. And so in Chapter 151a, the deceased is described as nfr Hr, and the Chapter is often illustrated on tombs, etc. by Anubis carrying out a mummification. Anyone in a stage of transformation is obviously going through a new stage and thus has to be nfr. Osiris, also sometimes shown as a mummy is also called nfr Hr.

I've just come across Betsy Bryan's uploaded paper here (Bryan 2014). I had heard about her work, but shame on me, I never read her paper. And it is worth a read. 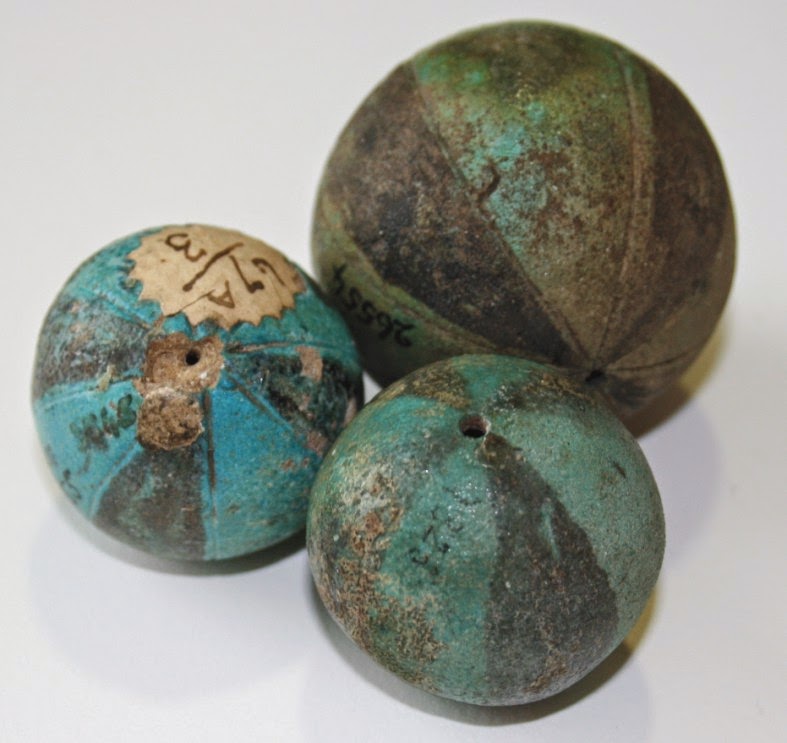 Anyway, within it (on page 110), I saw a faience ball which looks remarkably similar to three faience balls which we have in the Egypt Centre. To the right is a picture of ours and click here for more information on them. 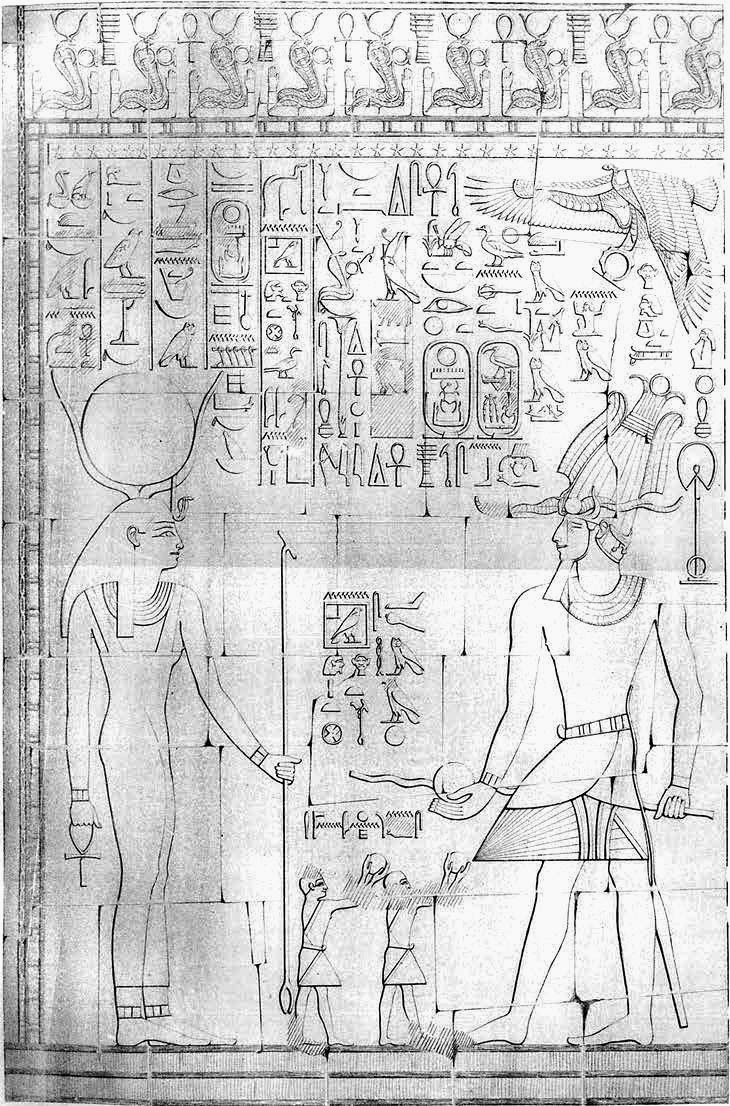 Betsy interestingly suggests that faience balls like this might have been associated with the ritual of 'striking the balls' which is illustrated on the Deir el-Bahri Hathor Chapel of Hatshepsut and is associated with the Festival of Drunkenness. Here is a picture of it, on the right, from Naville's 1901 publication. The balls represent the eyes of the enemies of the sun-god, these could represent the aggressive or vengeful aspects of the Eye of Re himself. In certain ancient Egyptian myths the Eye of Re is sent out by the sun-god to destroy human kind. The god changes his mind and the Eye needs to be destroyed or placated. The first written example of this myth, The Return of the Distant One occurs on one of the four golden shrines of Tutankhamun where it is called The Destruction of Mankind. Once Hathor is placated she revives her father through her sexuality. 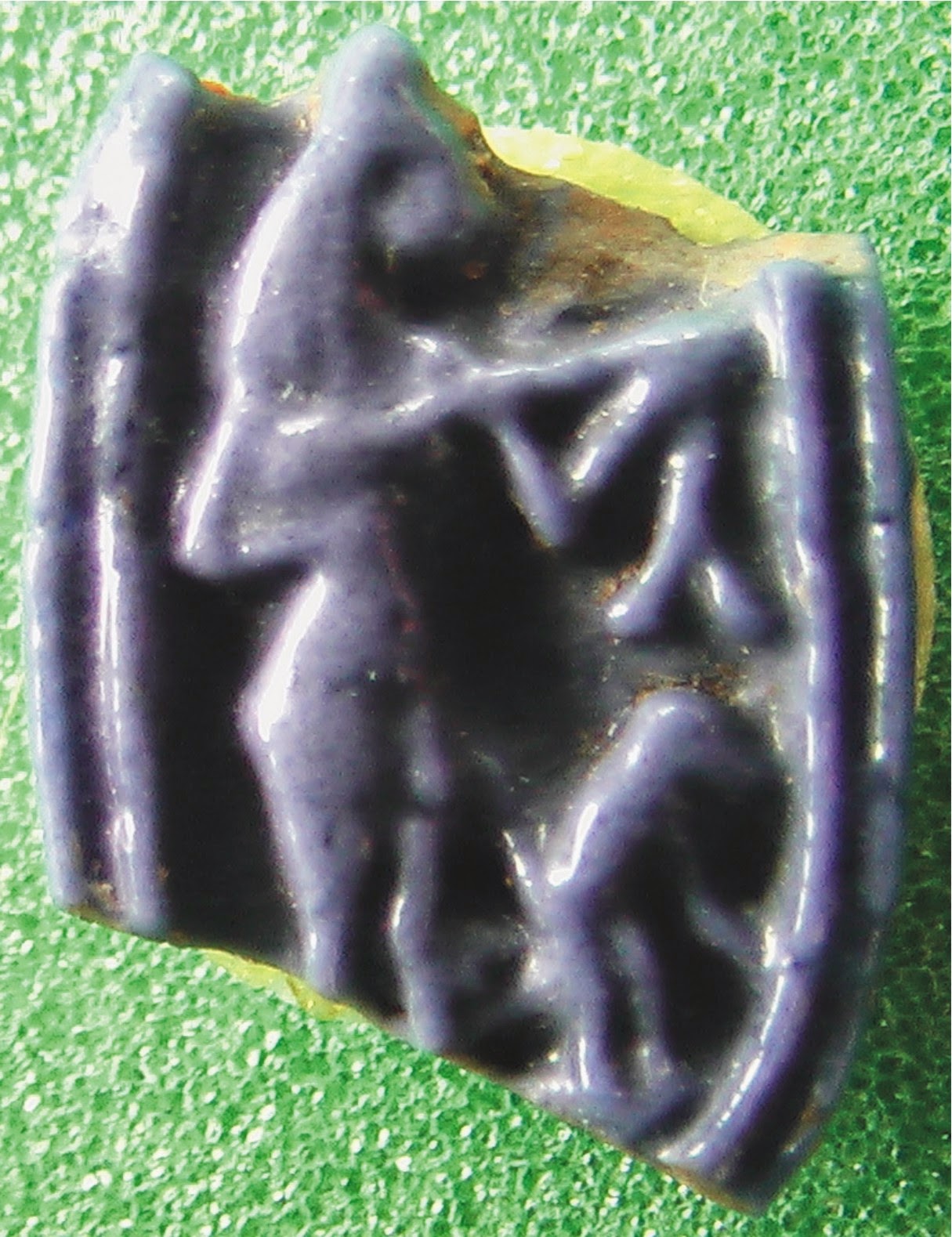 As well as the myth of The Return of the Distant One, alcohol and music played important parts in the festivals of drunkenness, as well as young women taking on the guise of Hathor. I have wondered if these young women are the adolescent but unmarried daughters of the tomb owner (nfrwt) and whether one of the items we have in the Centre relates to this, our Amarna lute player ring bezel, pictured here on the left (Graves-Brown 2014). More information on this item can be found here. This would mean that objects such as this were ritual rather than purely sensual.

One might ask why the nfrt, the adolescent, unmarried daughter was considered particularly powerful. There is evidence that women were considered to have a dual nature, mirroring the goddess Hathor, and that female sexuality was considered dangerous and in need of taming. For a bit more on this see a previous blog and Kasia Szpakowska's comments on it.  Xekalaki (2007: 48–49) discusses the taming of the daughter through sexual activity and motherhood. This idea is given support from a passage from the Instructions of Ani urging a man to take a wife and teach her to be a ‘human’, thus implying that women were only considered fully adult once they had married (Toivari-Viitala 2001: 52–53). Adolescence is a liminal time, and cross-culturally, the liminal is considered perilous.

This might explain the presence of semi-clothed young women in tombs, they were mirroring the revivication role of Hathor. Indeed, a similar idea is suggested for New Kingdom royal daughters by O'Connor (2010). The daughter appears to revive the father through inebriation and music, and in The Return of the Distant One Hathor is appeased through music and drunkenness and in her turn revives her father through sexuality. The festivals depicted on tomb walls seem most likely to have been amalgamations of several festivals in which the deceased would wish to partake, (Harrington 2010/14), though the Hathorian daughterhood and revivication through her sexuality could be vital.

So thank you to Betsy for food for thought, and as usual some speculation.

Bryan, B.M. 2014. Hatshepsut and Cultic Revelries in the New Kingdom, In eds. Galán, J.M., Bryan, B.M. and Dorman, P.F. Creativity and Innovation in the Reign of Hatshepsut. Occasional Papers of the Theban Worshop. 2010. Chicago, 93–125.


Harrington, N. 2010; 2014/in press 18th Dynasty banquet scenes: ideals and realities, In C. Draycott (ed.), Dining and death: interdisciplinary perspectives on the "funerary banquet" in art, burial and belief, Leuven, Paris. A copy of the unpublished paper can be downloaded from: https://usyd.academia.edu/NicolaHarrington/Papers (accessed Dec 2013).

Toivari–Viitala, J. 2001. Women at Deir el–Medina. A Study of the Status and Roles of the Female Inhabitants in the Workmen's Community During the Ramesside Period, Leiden.

Xekalaki, G. (2007) Symbolism in the Representation of Royal Children in the New Kingdom. PhD, University of Liverpool.
Posted by Unknown at 02:44 1 comment:

If you are looking for a gift associated with this season of revival why not buy a hippo!

It seems well known that hippopotami are dangerous animals, and so for the ancient Egyptians they were symbols of aggressive protection and even of evil (we have a statue of Seth as a hippo in the Egypt Centre, but more on that another time)

Hippos, were also for the ancient Egyptians symbols of greed, they were called 'water pigs', but also rebirth and regeneration. The obvious example of this, is of course Taweret, and I've blogged about her previously (you can follow the labels on the right here and click on Taweret).

As symbols of rebirth and regeneration they were popular on amulets for the dead, such as the one here, on the left. The newborn king was said to be nourished by the milk of a hippopotamus goddess

As hippos live in the fertile Nile mud and river, no wonder they were associated with new life. To reinforce this connection with new life, some model hippos were made in faience and decorated with new marsh plants. There is one such example in the British Museum. The colour blue was associated with the heavens, water and the Nile, and thus futher reinforces the rejuvenating aspects of this animal. 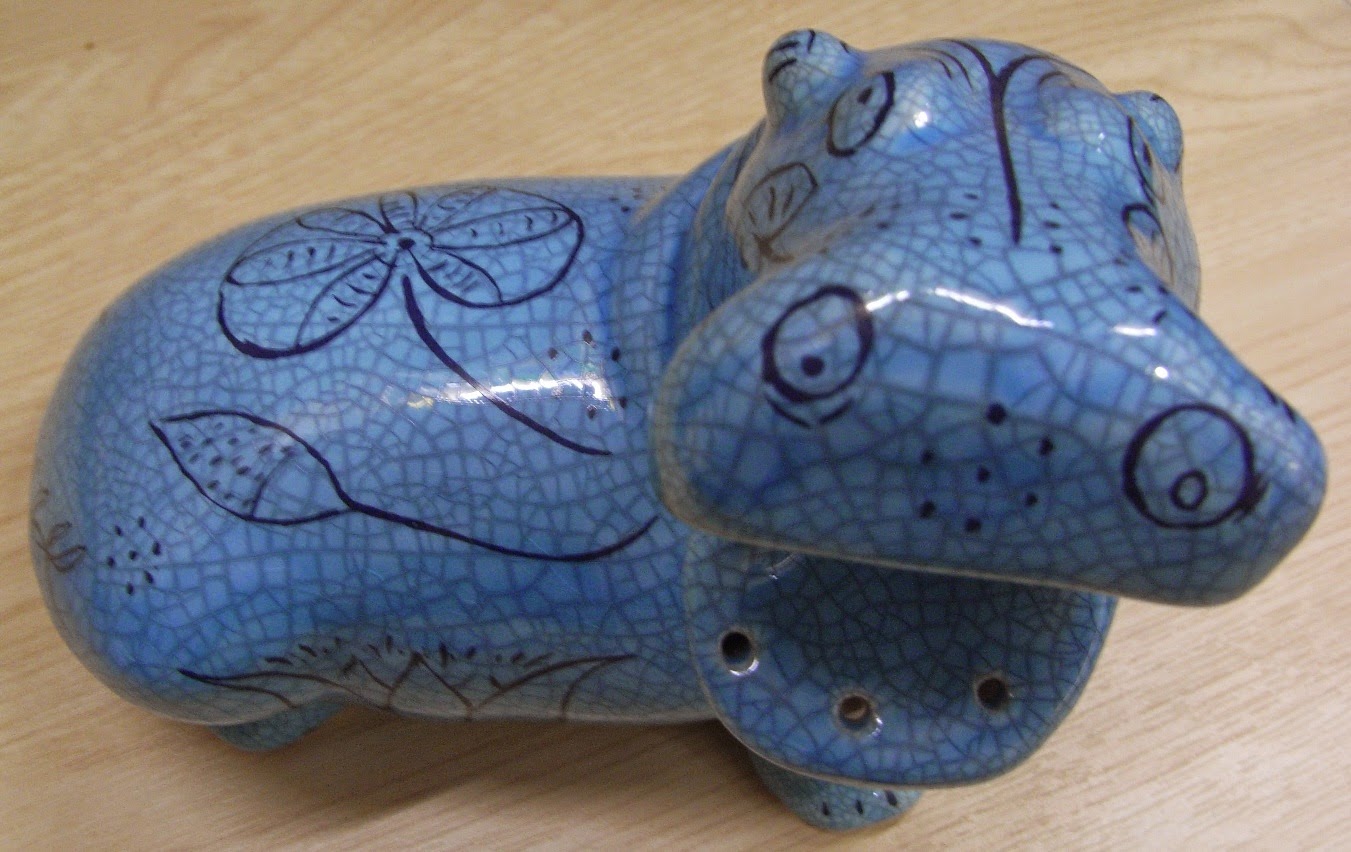 Unfortunately we don't have such a beautiful faience hippopotamus in the Egypt Centre collection, though we do have a copy of one which we sell in our shop, so I shall just show you the picture of her here (right). Isn't she sweet?
Posted by Unknown at 02:23 No comments: