Big thank you to Alison and Phil John for restoring our lion bed to its former glory.

Here are a few pics of its reinstatement: 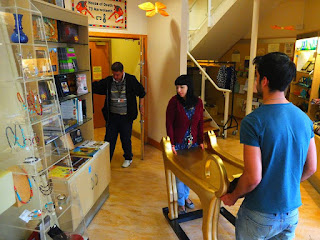 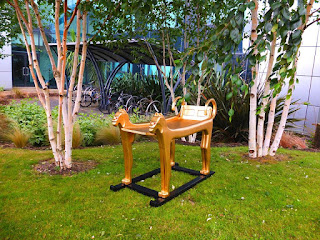 Our lion bed is used to support Bob, the dummy mummy's, journey to the afterlife.

The ancient Egyptians decorated furniture such as beds with the legs of lions and some were made even more lion like by the addition of heads and tails.

W1309a, right, is on display in the woodworking case upstairs. Doesn't he look splendid? Lions are associated with rebirth and thus were often used to decorate funerary beds from the New Kingdom. If you look at our replica you might notice a strong resemblance between the golden funerary beds of a well known New Kingdom Egyptian king!

And here we have a close up of a stela in the Egypt Centre showing Anubis (or a priest with Anubis mask) carrying out a mummification rite on a body which is on a lion bed:

Winifred Needler gives a good outline of such lion beds.

Needler, W. 1963. An Egyptian Funerary Bed of the Roman Period in the Royal Ontario Museum. Toronto.

Very interested to read Rita Lucarelli's article yesterday. I'm certainly not an expert on the Book of the Dead, not indeed daemons, so advance apologies to Rita if I misinterpret her. Her paper can be seen by clicking here.

Basically, it is about mound 14 from the Book of the Dead Spell 149. This mound is one of several illustrated on copies of Book of the Dead Spell 149, and one through which the deceased had to travel in order to get to the afterworld. Rita compares demons from the Book of the Dead papyri with other daemons which appear to be very similar from elsewhere. She concludes that the daemons seem to be very similar to those describing the journey of the sun boat across the sky, a means by which the deceased shared in the sun god's daily rebirth and the annual Inundation of the Nile, another rebirth trope.

So, we haven't got a mound 14 on any of our Book of the Dead fragments, but we have got a fragment of mummy bandage showing Spell 149, and the first 5 mounds. That's it on the picture above. It shows 5 mounds, each with a daemon. The one second from the right looks like he is playing a drum! More about the fragment here.

I understand Rita is writing up an article on the other daemons in Spell 149, when it's published expect another blog on this piece!

Email ThisBlogThis!Share to TwitterShare to FacebookShare to Pinterest
Labels: Book of the Dead, demon, mummy 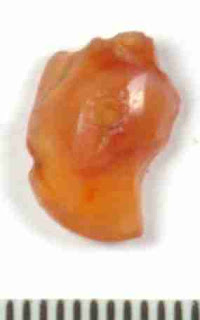 Recently writing a review of Wofram Grajetzki'sTomb Treasures of the Late Middle Kingdom. The Archaeology of Female Burials. And very good it is too. He discusses Middle Kingdom elite female burials and divides them into groups. One group, largely of young women who have the title 'King's Daughter' are very often found with some rather special jewellery. Claw amulets are one element, like EC1025 which we have in the Egypt Centre (shown here, left). They were worn on the ankles of the women.

I did wonder if these type of burials are associated with the khener (a particular type of dancer) and paddle dolls (we have one in the Centre) as written about by Ellen Morris. The only known depiction of a woman wearing them seems to come from the tomb of Wakhai II, at Qau el-Qebir. She seems to be a dancer. 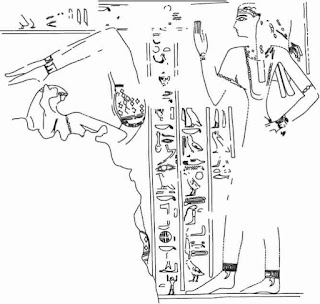 That aside, the claw amulets are not only pretty but intriguing. Are they associated with birds of prey, or with felines? An argument could be made either way. I have put a bit more about them here.