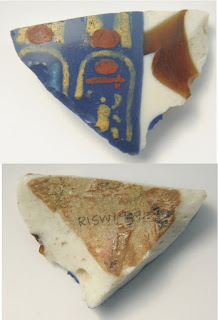 A piece of ancient glass over 3000 years old, displayed in Swansea University’s Egypt Centre, has been published with information on its manufacture. It has been identified as being part of an Egyptian vase which is currently in the Cairo Museum. It is on loan from Swansea Museum. Garethe el-Tawab, Curator of Swansea Museum said: “ The loan of this very rare piece of ancient glass by the Museum to our colleagues in the Egypt Centre is a marvellous example of partnership working in international research”. I thought that was a good quote, better than I could have thought up myself.


The fragment, originally belonging to pharaoh Amenhotep II (1427-1400 BC), is 4cm long piece and displays two names of the king in cartouches picked out in red and yellow on a background of brilliant blue. The names are surmounted by red sun-disks and yellow feathers.


The glass fragment was given to Swansea Museum in 1959. Circumstantial evidence suggested it came from the tomb of queen Tiye (wife of king Amenhotep III). Kate Bosse-Griffiths wrote an article about this and other items from the tomb (see references below). It had been given to Swansea Museum by Miss Annie Sprake Jones of Abergwili who received it from her brother Harold Jones. Harold Jones had been employed as an artist in the tombs of the Valley of the Kings in the early 20th century.


German Egyptologist, Birgit Schlick-Nolte contacted the Egypt Centre  and Swansea Museum as she was interested in the manufacture of early Egyptian glass. Kate Bosse-Griffiths, who had earlier curated both the Egypt Centre items and those at Swansea Museum, and Birgit had long ago corresponded on the piece, and both were absolutely sure that the Swansea fragment was part of the vessel in the Cairo Museum which comes from the tomb of Amenhotep II. The complete vessel measures around 40cm in height and consists of a white amphora decorated with brown and light blue decoration.
Glass of this date is extremely rare in Egypt and was often given as diplomatic gifts between the kings of the region. Vessels and other artefacts from the reign of Amenhotep II are part of an extraordinary array of sophisticated techniques from an innovative period of glass production. Large vessels such as that in the Cairo Museum, from which our fragment originated were not even attempted in later years. At this date the manufacture of glass was a royal monopoly and valuable like gold and silver.


The Swansea piece with the king’s name would have been prefabricated and placed upon the body of the vessel while it was still in a molten state. Interestingly, one of the names for glass in ancient Egyptian was ‘the stone that flows’.”

Email ThisBlogThis!Share to TwitterShare to FacebookShare to Pinterest
Labels: glass

Icon of Berlin and Egypt. 100 years of Nefertiti 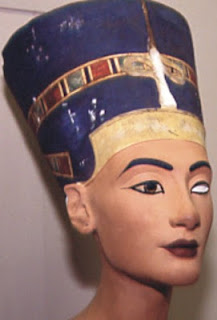 This replica bust of Nefertiti welcomes our visitors. 100 years ago, on the 6th December 1912 the original was uncovered at Amarna by the German excavation team headed by Ludwig Borchardt. The original is now in Berlin and has caused some controversy as it has been claimed that it taken from Egypt illegally. It is, of course, an iconic symbol of Egypt but is also loved by the people of Berlin and thus has also become a symbol of that city.

The original was found, with others, in the workshop of the sculptor Thutmosis in a walled-off closet. There is one inlaid eye made of rock crystal in the original suggesting that the piece was never finished. As it may have been an artist's model perhaps there was never any need to finish it.

Nefertiti was a wife of the so-called 'heretic' pharaoh Akhenaten who built a new city on the banks of the Nile around 1340 BC to worship the god the Aten. Previously, the main god worshiped in Egypt had been Amun, the god of Thebes. The Egypt Centre has over 200 artefacts from the royal site of Amarna (originals not copies).

This queen was one of the few Egyptian royal women who attained any importance. Nefertiti is even shown smiting the female enemies of Egypt-such smiting scenes were usually reserved for kings. It is possible that for a time she even acted as joint ruler with her husband, though this is debated. During the Amarna Period there seems to be a change in depictions of royal women. Not only are they sometimes painted a reddish colour, usually reserved for men, but at times they are also shown as mature women, with signs of ageing. For much of Egyptian history women were depicted as slender and youthful.

Our copy of the bust of Nefertiti was brought to Swansea in the 1960s by Professor of Classics George Kerferd. It seems probable that it was made from the Berlin original by the sculptor Tina Wentcher (also known as Ernestine Haim). She produced a number of replicas in the years following World War I and there are now many examples scattered throughout the world.

The bust of Nefertiti is perhaps the most well-known depiction of ancient Egyptian women. But, while it is considered an archetype of female beauty we cannot be sure that Nefertiti actually looked like this. As with all Egyptian art, representations were idealised and stylised.
Posted by Unknown at 05:31 No comments: