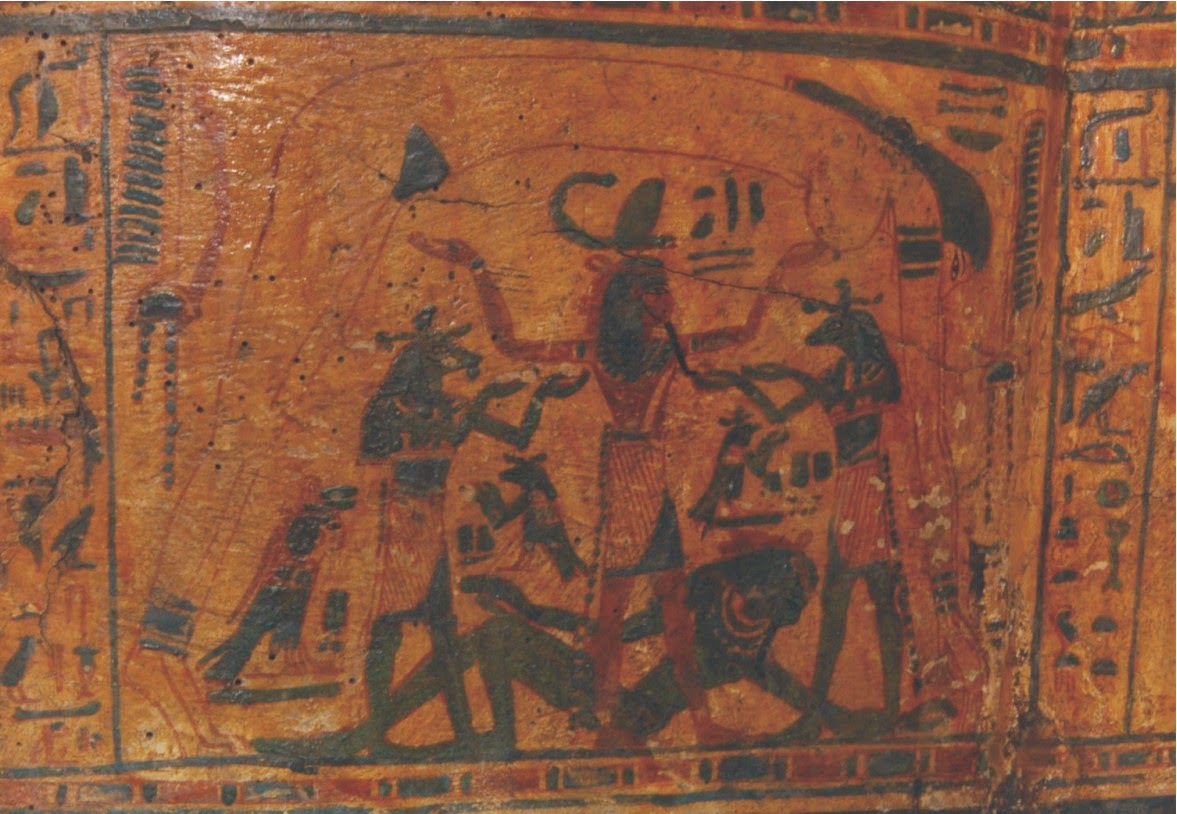 On a coffin in the Egypt Centre (W1982) we have a really great scene of the seperation of heaven and earth, with Geb and his consort Nut seprated by Shu (or in or case Heka). Little bit more about it here. There are several reasons why I find this interesting, one because this motif shows a male god as the earth and a sky god as female (in conrast to the usual mother earth idea prominent in many cultures). In the case of our coffin it has the god of magic, Heka, in place of the usual Egyptian god Shu. Usually Shu seperates the pair and ours is one of the few where it's different. This is a scene of creation. 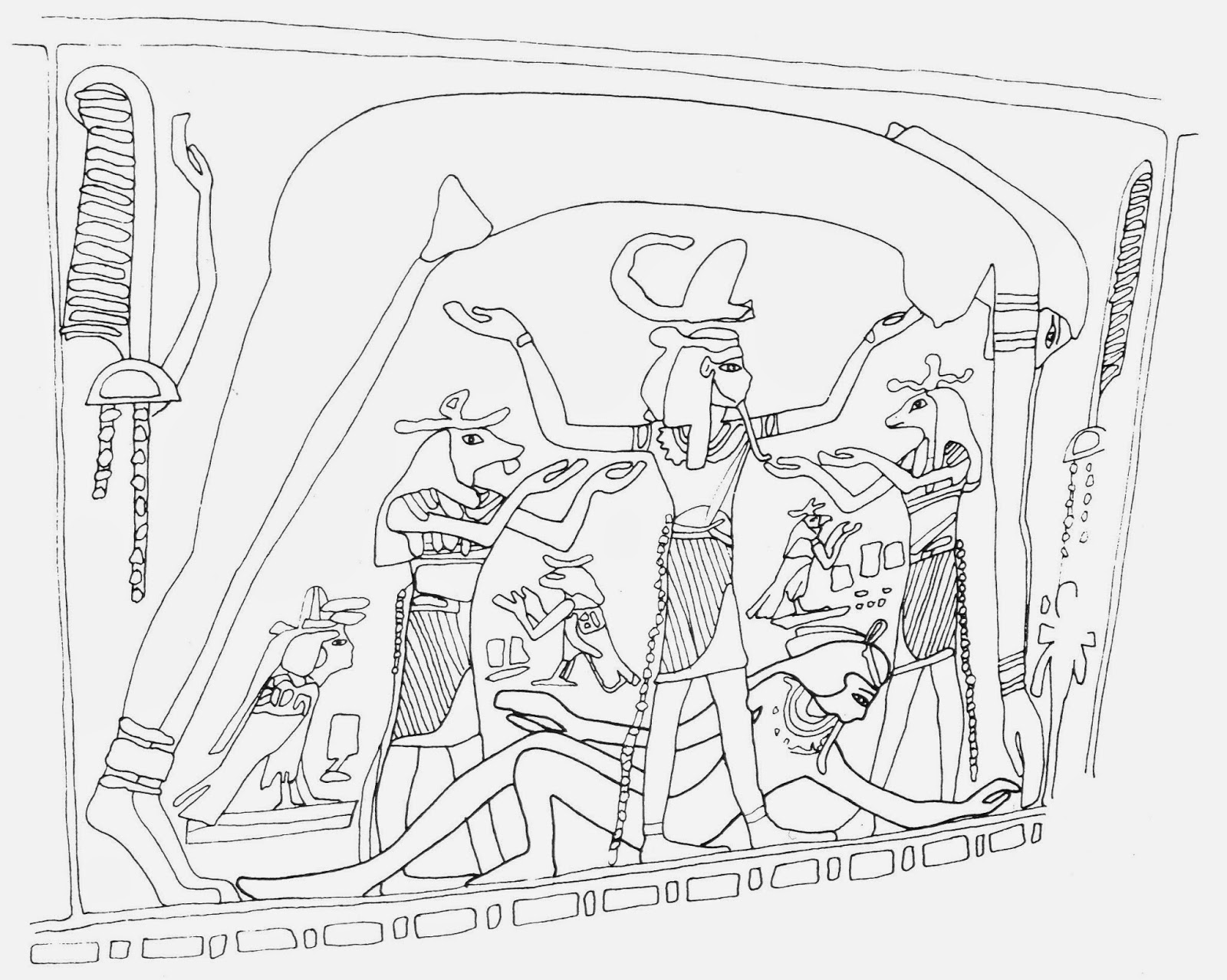 But I am getting off the point, I was going to talk about rams and sheep and such on this secene as it is approproriate for the start of the Chinese New Year (being the year of the ram, or goat or sheep). Should point out that Egyptologists see these clearly as rams. However, there is some debate as to whether the Chinese year is a ram, a goat or sheep. 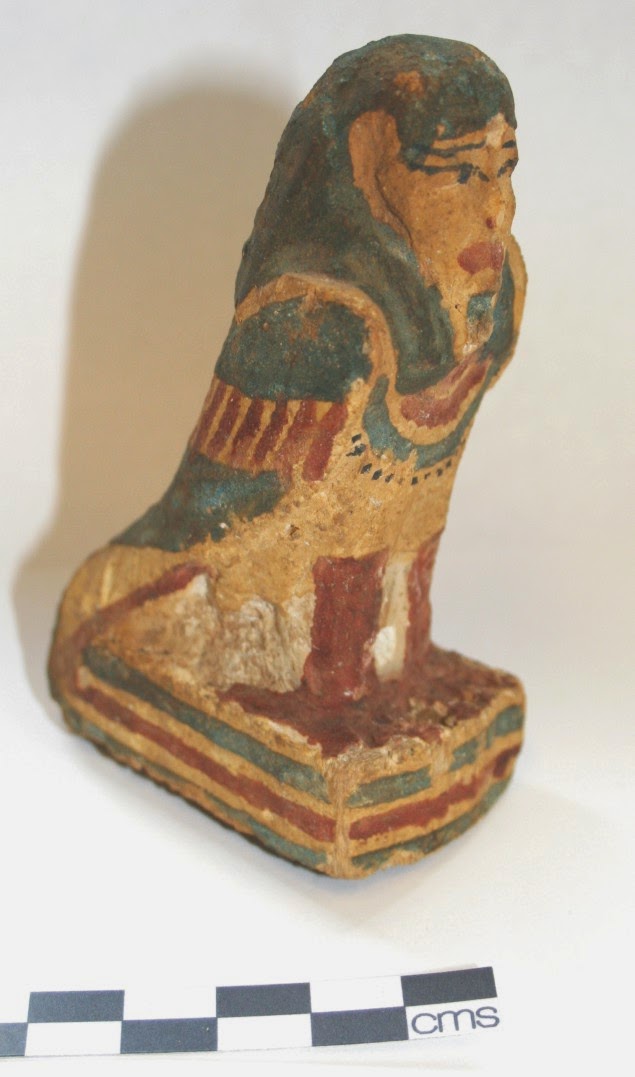 Rams were associated with a number of gods in and perhaps in the Theban area were particularly with the night-time aspects of Amun (Niwiński 1987-88, 104). Additionally, the Ram of Mendes is the ba spirit of Osiris and the solar ram is associated with crossing the netherworld at night (Eaton 2006, 87). Rams generally represent fertility. So all this is a good reason for them to appear on a scene of creation.

The ram is also a metaphor for the part of the soul the Egyptians called the ba. This probably derives from the Egyptian for the ba should being the same word as ram, i.e. bA. Ba-birds are often shown as birds with human faces. We have several wooden depiction of them in the Egypt Centre and the the left I show you one. There is a bit more about them here.

On our coffin, the idea that these are indeed intended as soul-birds is reinforced by the addition of the ba-bird (the birds with human heads) also in the scene, and two of these ba-birds (those beneath the arms of the kilted ram-headed figures and shown with arms in front of them in a gesture of worship) appear to have rams horns. E1.1822 in the Fitzwilliam also depicts ba-birds without horns, there called ‘the living soul of Osiris’ (Budge 1893, 49) - I think - I haven't checked this on the actual coffin. Liptay (2011, 66) believes the combination of ram and ba-bird invoke Chapter 85 of the Book of the Dead where ram and bird appear alternately on vignettes.

So those rams seem to have lots of meanings.

Budge, E.A.W. 1912. The Papyrus in the . The funerary papyrus of princess Nesitanebtashru, daughter of Painetchem II and Nes-Khensu, and priestess of Amen-Ra at , about B.C. 970. : Trustees.

Goff, Beatrice L. 1979. Symbols of Ancient in the Late Period. The Twenty-first Dynasty. , and : Mouton Publishers.

Niwiński, A. 1987-88. The solar-Osirian unity as a principle of the theology of the ‘State of ’ in Thebes Dynasty 21. Jaarbericht van het vooraziat-egyptische Genootschap, 30, 89-106.
Posted by Carolyn Graves-Brown at 02:38 No comments:

In view of the recent advertisement for the forthcoming demon conference in Swansea, I thought I would tell you a bit more about a couple of the items featured on our poster (put together buy Kasia Szpakowska and her demon team Felicitas Weber and Zuzanna Bennett). Here is the poster: 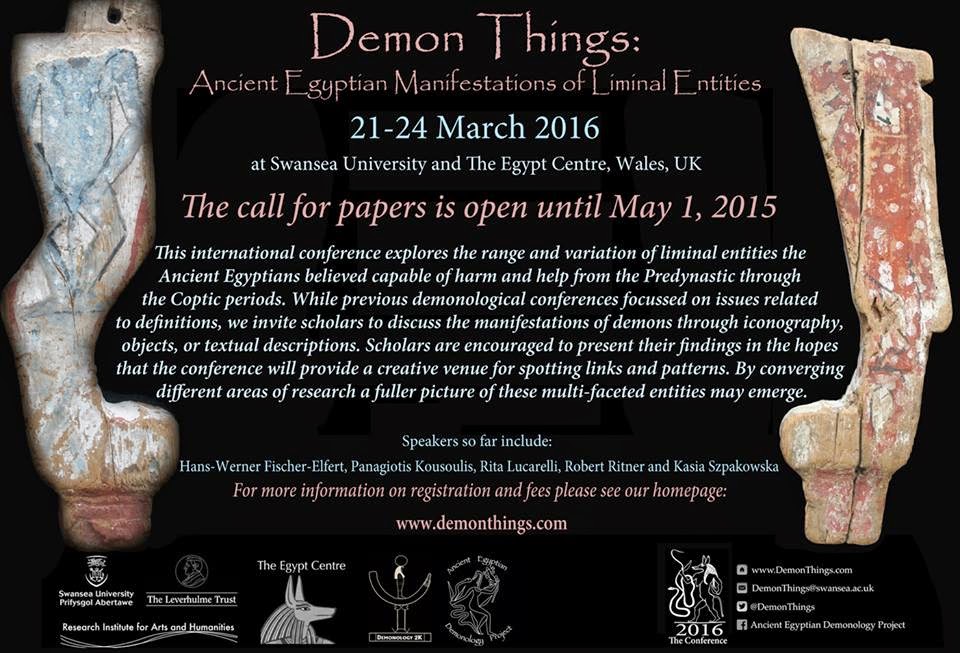 Part of what I am about to suggest, is of course speculative, that is, I can't prove it but I wonder if the two bed legs featured are part of a 'woman's bed' of the type mentioned at Deir el-Medina, for women to nurse their young babies. Whether that is the case or not, the legs are quite unusual in showing in paint Bes and Taweret with a snake. The left leg above shows Bes, and the right Taweret, the snakes are painted in red on the inside of the bed. They have the Egypt Centre accession number W2052a (the Bes leg) and b (Taweret). Their similarity suggests they are part of the same bed. W2052a is from the foot end, left side if you were looking from the head of the bed. While W2052b from the head, right side. This would place the snakes on the outer surfaces of the head and foot ends and Bes and Taweret on the opposite outward facing edges.


Sir Henry Wellcome purchased these bed legs, decorated with pictures of Taweret and Bes, in 1906 from the collection of Robert de Rustafjaell. One is marked in pencil ‘Akhmim’ suggesting that it possibly came from this area.

Bed legs such as those here are frequently constructed in the shape of lion legs. Just as the lion was symbolically associated with the rebirth of the sun at dawn, a lion shaped bed might confer refreshed awakening from sleep for the occupant.

The ancient Egyptians saw the hours between sunset and sunrise as particularly dangerous, a time when they may be at risk from malevolent forces. To protect themselves from such powers positive deities were called upon. The two most common were the hippopotamus goddess Taweret and the dwarf god Bes. It is possible that beds were generally decorated with such deities, however, Taweret and Bes were also particularly connected with women in childbirth.

Thus, these legs may be part of a 'woman's bed' upon which a woman would have given birth and/or rested shortly after birth.

At New Kingdom Deir el-Medina, ‘women’s beds’ appear to have been purchased along with birth amulets [Toivari-Viitala 2001, 178]. Unfortunately, we don’t know what such beds were like, though there are clues in the ‘Wochenlaube’ scenes (see footnote) and in model clay beds [Pinch 1983, 406, pl. V]. On both, snakes are shown. On the clay models, the bed legs may take the form of Bes, and a snake is depicted on either long edge of the bed. But only one complete bed exists which depicts snakes; it is that of Sennedjem, which is Ramesside in date, and like ours has a painted decoration. Here two snakes are shown on the bed frame, one on each side. Other depictions of snakes on actual, as opposed to model, beds do occur, e.g. a New Kingdom bed leg from Thebes has cobras entwined around the legs (EA 21574; Quirke 1992, fig 70). Depictions of Bes on actual beds are, however, much more common (Graves-Brown 2010). Pinch (1983, 406, pl.V) shows that on depictions on ostraca of mothers nursing their babies, Bes appears on the bed legs.

On the Wochenlaube scenes the snake has been identified as a protective fertility snake by Brunner-Traut (1955, 24). There are also parallel scenes where Isis and baby Horus are shown flanked by protective serpents.The pottery beds on which such serpents appear are dated to Pinch (1993, 209) as late 18th Dynasty to Third Intermediate Period.

The legs may well have come from a tomb, however, this does not preclude their use in everyday life. Birth items were particularly apt for the tomb as, for the ancient Egyptians, rebirth in many ways, mirrored birth.

Toivari-Viitala, J., 2001. Women at Deir el-Medina. A Study of the Status and Roles of the Female Inhabitants at the Workmen's Community During the Ramesside Period. .

Footnote: Several ostraca are known from ancient shown nursing women seated on beds, often with convolvulus and sometimes with snakes depicted. Women may be shown having their hair done and a mirror may be evident. Similar scenes also appear in the front rooms of some houses at Deir el-Medina. These scenes, which seem to indicate some special area for birth or post-parturition recuperation, are termed by Egyptologists ‘Wochenlaube’ scenes (the term was coined by Brunner-Traut in 1955).

Posted by Carolyn Graves-Brown at 01:27 No comments: 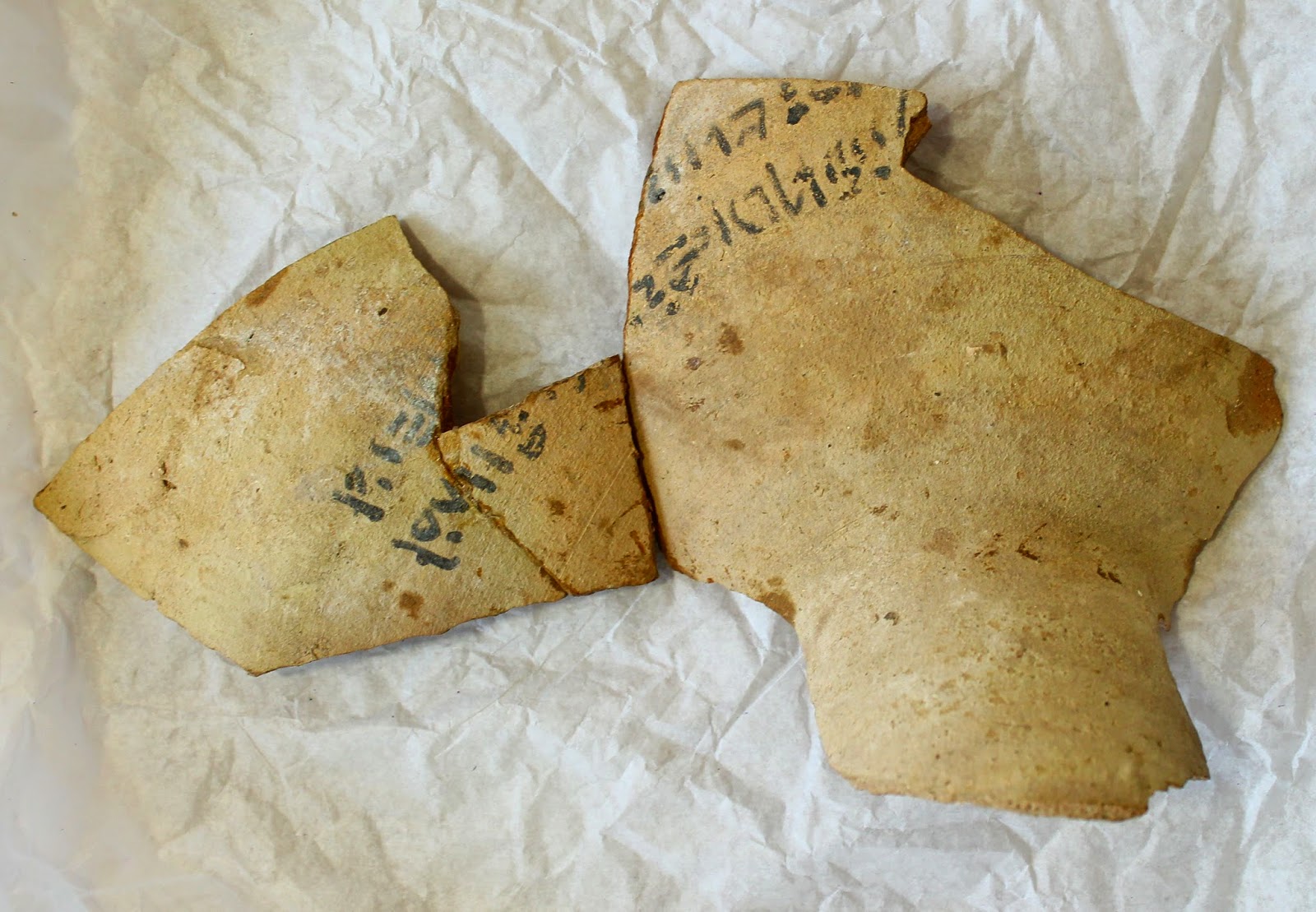 And thank you again to Dulcie Engel, who led our handling session on ways of writing. This is one of the objects she chose and our volunteers got to actually touch it. Another item is featured here. We are doing a session in March for members of the public.

The inscription states that the wine came from a vineyard in the Western River and was bottled in the 12th year of the reign of the king. In 3 pieces. 27.5cm long. From Amarna.

The Western River is thought to be the Canopic branch of the Nile in the western Delta. Wine making in ancient Egypt dates back to at least the Early Dynastic Period. According to Plutarch it was the god Osiris who first taught the Egyptians to drink wine. The best wine came from the Delta region.

Most of the fragments of wine jars from Amarna were found in the Central Palace, though there a number of fragments also come from the Workmen’s Village. It has been suggested that the wine labels found in the Workmen’s Village show that vessels were reused for other purposes. Wine labels are important for dating the site of Amarna. Year 17 is the latest attested date of label.