A head, a collector, leeches and dwarves 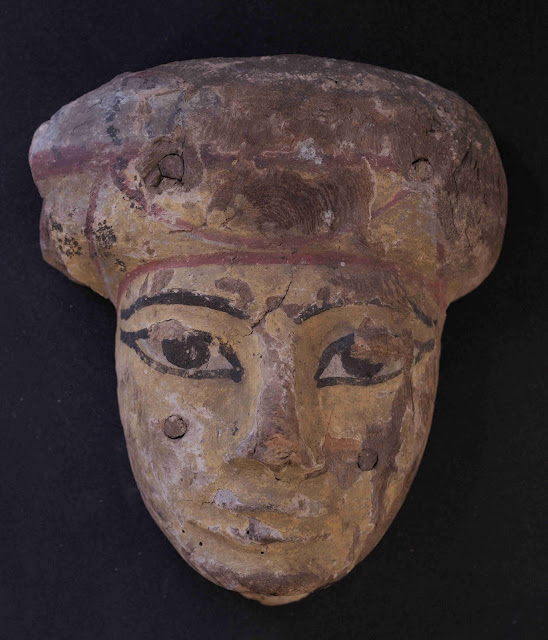 I photographed this object on Monday in advance of a talk, and have just found out a little bit more about its history which I would like to share.

It is a head part from a Third Intermediate Period coffin (so around 3000 years old). It's made of wood and is around 24cm high. The wood is covered with plaster and then painted. The yellow colour suggests that this was from a woman's coffin, as women tended to be painted with yellow paint.

It has a label on the back showing that it was part of the Wellcome collection. Most of the objects in our museum are part of that collection, collected by Sir Henry Wellcome, the pharmacist. More about him here. But where did he get the object from.

Well apparently it was given to him in 1927 by someone who was well known as an Egyptologist, though had never been to Egypt, Warren R. Dawson. Warren Dawson (1888-1968), was encouraged by the curator of the British Museum, Wallis Budge, to study Egyptology. If you google his name, you will see he wrote various articles including the curiously titled Magician and Leech: A Study in the Beginnings of Medicine with Special Reference to Ancient Egypt, a paper on pygmies and dwarves and also material which he published with Grafton Elliot Smith, well known to students of the history of archaeology. Obviously a scholarly gentleman, who knew several other scholarly gentlemen, he was also interested in science and medicine.
Posted by Unknown at 05:54 1 comment:

This is a fragment of a magic wand on loan to us from the British Museum. B EA38192 is16cm long, and made from a  hippopotamus tooth.

In the Middle Kingdom to Second Intermediate Period (2055–1550 BC) these mysterious ‘apotropaic wands’ appear. Around 150 are known in museums around the world. It is possible that these continued into the New Kingdom as they are depicted in New Kingdom tombs, for example that of Rekhmire (Roberson 2009, footnote 66).

These things are usually made of hippopotamus canine teeth, split in half to produce two curved wands with one side convex and the other flat. Hippopotamus tooth is incredibly hard so this would have been difficult to make. So hard in fact that a 2006 television documentary ('The Darkside of the Hippos' broadcast on Channel Five on 31.5.2006) stated that the tusk could reputedly stop bullets. The material possibly invoked Taweret a hippopotamus goddess of childbirth. It is possible that hippopotamus ivory was considered important because of the power, strength and mothering qualities of the female hippo.

Although the whole is usually carefully carved and polished, with well executed animal heads forming the ends of more complete examples; the mythical creatures depicted thereon appear much more roughly engraved. Perhaps this shows that the making of the complete, but un-engraved wands, was carried out by one group of skilled people and the engravings of the animals by another less skilled group. However, not all wands depict roughly executed animals. A fragment of a wand from the Berlin Museum (9611) was described by Adolf Erman as ‘the finest ivory working I have ever seen’.  It has a beautifully executed toad and jackal standard in raised relief (Oppenheim et al. 2015: 200­–201 with references).

The engravings upon such wands depict deities associated with the protection of young infants and with childbirth, for example the frog goddess Hekat, Taweret and Bes. This broken wand from the has an image of a frog deity holding a knife blade in its foot. On other knives too, deities often carry protective knives or snakes. The inscriptions also bear witness to the fact that these ‘wands’ are intended to be protective, e.g. ‘Cut off the head of the enemy when he enters the chamber of the children whom the lady…has borne’ and ‘Protection by night, protection by day’ (Steindorff 1946, 50).

The series of mythical animals on wands like this often all face the same way as though in a procession. However, in this one, as in a few other examples (e.g. Louvre 3614 published in Oppenheim, et al. 2015: 200), there appear to be two ‘processions’ facing one another.

On British Museum EA38192, the image on the far left on the wand appears to be a snake. Only its head is shown. In front of the snake is a mythical creature, a serpent-necked feline with spotted coat (these are sometimes called ‘serpopards’). The serpotard appears to have been a Sumerian motif introduced into Egypt in the Naqada II Period. Such creatures appear on other apotropaic wands, e.g. an example in the Metropolitan Museum of Art (MMA 22.1.154, in Hayes 1953 vol. 2, fig. 159) and Walters Art Gallery 71.510 (Capel and Markoe 1996, 64). They also appear on the faience feeding cup also on the Metropolitan Museum of Art, though here without spots (MMA 44.4.4). Since such items seem to occur with other apotropaic creatures, and at least one is shown with the sa-sign for protection on its back (Walters Art Gallery 71.510), it is assumed that the serpent-necked feline is also apotropaic.

In front of the serpopard is a seated ape holding a wedjat eye. It faces a standard with a canine head atop. The canine head, on, or as part of a standard, represents wsr, the sign for power and also appears on Walters Art Gallery apotropaic wand 71.510, The Waters example, however is not so clearly depicted as a standard but rather as a canine head with legs. In both the Walters example and the British Museum example here, the sign holds a knife.

The Walters Art Gallery Example example, also shows a sun-disk with legs, which can be seen as the figure on the furthest right on the British Museum wand.

At the far right are a series of parallel lines. Often such wands have an animal head at one or both ends.

Inscriptions also usually name the mother and the child. The child is invariably a boy. There could be several reasons for this. The first might be that these items were only made for boys. The second might be that as most of the tombs in which the wands were found belonged to men, most of the wands belonged to men, but this does not mean that girls did not have them in life. The preponderance of male names may also be a result of putting names on tusks before the birth of the child and indicate that male children were usually hoped for (Szpakowska 2008, 30). But, the fact that these items were repaired and spells thereon suggest several children it seems likely that these were used for girl as well as boy babies.

Egyptologists usually claim these wands were used to protect women in childbirth or young children, though most have been found in tombs. The fact that the points of some wands are worn away on one side has suggested to some that they were used to draw a magic circle around the child (Hayes 1953, 249). Some examples have perforations at each end with a cord running through perhaps to carry or move other objects (Teeter and Johnson 2009, 77). On tomb walls wands are shown being carried by nurses (Robins 1993, 87) but here their presence shows that they had a secondary function of protecting the deceased at the time of their rebirth.

Goodridge, Wendy and Williams, Stuart 2006. Offerings from the , .

Hayes, W.C. 1953. The Sceptre of . A background for the study of Egyptian antiquities in the Metropolitan Museum of Art. Volume I. : The of Art.

Starting from the 24th May 2016, I’ve been involved in a work experience programme at the Egypt Centre, located in the Taliesin building on Swansea University’s Singleton Campus. The Centre operates as a learning facility for young children to come to, ranging from various ages and venturing from numerous primary schools across England and Wales. My work experience was part of a placement initially organised by the College of Arts and Humanities to give me a chance to work in the heritage sector and understanding the daily operations of a rather unique museum. Also, the placement is meant to give me a platform to pursue other heritage work in the coming years.
On the ground, the Centre is run by a fairly small core set of staff compared to other larger museums, and then the galleries are largely shadowed and assisted by a large volunteer base. This allows as many people who would like to get involved in heritage work to get a taste of life in the field, and for those who volunteer their time consistently; this format allows working in teams that are never the same and meeting a large amount of people from different backgrounds and walks of life; which is largely rewarding. I have engaged in customer service, shadowing various activities, even conducting a mummification activity on my own.
The galleries themselves are fascinating to me, as someone who has not studied Egyptology or any ancient civilisations in any depth. The various coffins, mummified animals and precious gemstones form parts of the Houses of Death and Life where the exhibits are held, allowing a contrasted insight into daily Egyptian life and evolving patterns over the various periods. For less intellectual heavy material aimed for younger audiences, the Centre offers a mummification activity for children to wrap their own (doll) mummy, and an enlarged board for the game of Senet, which is similar to the game of Snakes and Ladders. Whilst these two examples are fun for the children and allow them to be interactive, they serve as an accurate representation of things ancient Egyptians would do in their time period, following on from the educational aspects the Centre aims to provide.
The main plus for the Centre, as stated at the beginning, is its unique nature. The Centre’s outreach to local schools and the wider community differentiates the Centre from larger national museums which often times let the reputations of the museum itself attract the visitors with little work. The Egypt Centre’s volunteers having exposure to working with children provides valuable experience for those who wish to go into teaching or other working environment with younger people.
To conclude, the Egypt Centre’s charm is its laid back but professional atmosphere and its dedication to the education of young students with a keen interest to learn. The various workshops, gallery exhibits and games allow variety of what can be seen and what can be done, and over the course of the two weeks I have been a part of the Centre, there has not been a day where I have not learnt something new or discovered something previously missed. This is important to attempt to know what it will be like should I work in a national museum in the future; if I am discovering new things every day in a smaller museum, what will it be like in a larger, national museum? This is an exciting prospect, and I’m happy for the Egypt Centre to have given me this insight.