Something I don’t know much about: Predynastic Pottery

Egypt Centre’s volunteer documentation assistants have just started audit checking a group of material from Armant. I have briefly blogged about it here, but I didn't explain how beautiful some of the pieces really are. Before I tell you about the Armant stuff, and particularly the pottery, a quick thank you to the volunteer documentation assistants, Richard, Olivia, Charlotte, Jessica and Lisa. They have been checking that the items in our store match the computer records, making sure they are photographed and not falling apart and adding information to the database!  While carrying out this they are learning a bit about museum documentation and are becoming adept at using the Modes Complete database. While most are Egyptology students, one is not.

Back to the Armant stuff. The pieces are all from the excavations cemeteries and settlement sites 1600-1900 which haven’t been published. We have possibly the most northern ‘Nubian’ A-group pottery in Egypt here in Swansea. The Armant material is largely Badarian (c.5500-4000 BC), A-group (c.3500-3000 BC) and includes the mysterious Saharan sherds. Some of the Badarian pieces are particularly amazing to look at. Granted, as this is real excavated and very old material, most of the pieces are fragmentary, but they are just soooooo fine. 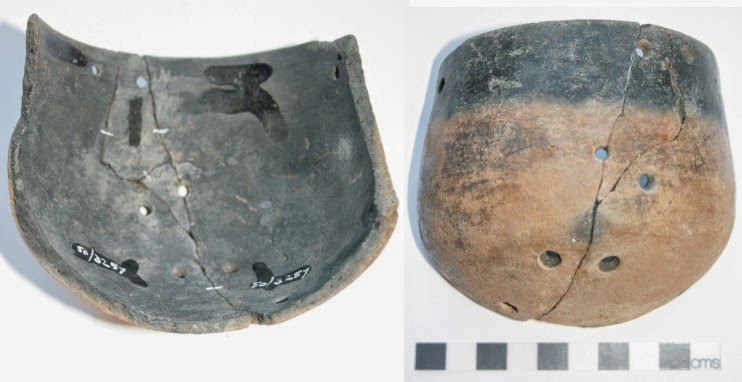 The piece above (AR50/3257) is on display. It is Badarian black-topped polished brown ware, a precursor to the later Naqada black-topped red ware. The walls are finer than those of the later stuff. The thickness of the walls is all the more amazing as the piece, like of its date, is coil made. That is a long snake-shape is made (a coil) which is then twisted into a pot shape and smoothed down. The piece shines slightly as it has been polished by rubbing with a smooth stone. Egyptologists argue about how the black top was achieved but it was generally thought that it was placed upside down in the kiln, into the smouldering ashes. The piece in this photograph has been mended in antiquity showing that it must have been considered important to the Egyptians. 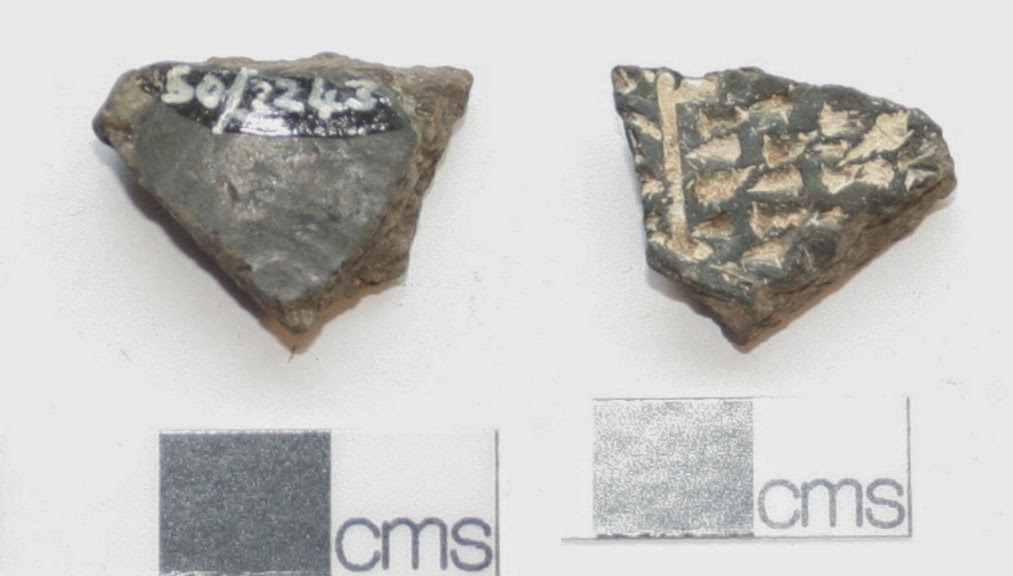 And here is a piece (503243) from Armant which has been decorated by impressing with a pointed instrument and then the holes filled with a white pigment. It was categorised by the excavators as A-group, though I am aware that some later Nubian pottery (C-group, 2300-1500 BC) as well as Petrie’s N-ware, also has this white pigment decoration. This, and other pieces have a dark brown, reddish fabric, which is like Petrie’s N-ware. N-ware, is generally believed to derive from Nubia. Unfortunately, I am not an expert on this so, if anyone has any thoughts I would be glad to hear. Whether, A, or C-group, this type of decoration is strongly reminiscent of Nubian wares. The other items found with the same grave context are largely fragments of finely made stone vessels, which would suggest, if Egyptian, an Early Dynastic date. There’s a good discussion on Petrie’s N-ware, with references, in Jane Roy’s, 2011. The Politics of Trade: Egypt and Lower Nubia in the 4th Millennium BC, 259-262.

If you want to know more about adult volunteering at the Egypt Centre click here.