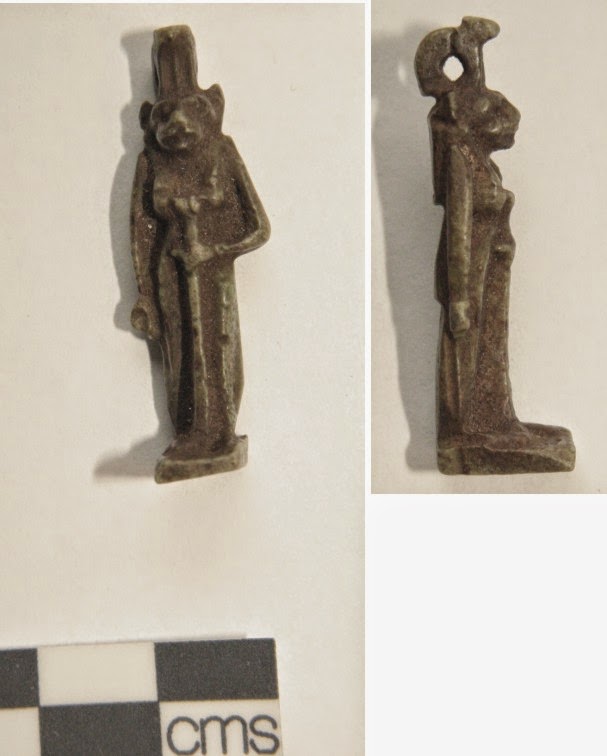 This is a small amulet about 3.5cm high. It is made of faience and was loaned to us by Woking College.  It shows a feline goddess holding a staff and wearing a cobra headdress. It’s accession number is WK42 and you can see it on display in the Egypt Centre.

Although we have called this a 'Sekhmet amulet', and indeed amulets of feline-headed goddesses are often so categorised, strictly speaking it could be one of a number of feline-headed goddesses: Bastet, Mut, Wadjyt, etc. All were daughters of the sun-god Re. The feline head may be either a cat or a lioness. If a cat it is more likely to reflect the passive, nurturing aspect of the goddess, if a lioness, it is more likely to show her aggressive side.  The addition of the uraeus cobra may possibly be to reinforce the aggressive or protective side of the goddess and to show her as the Eye of Re, a daughter of the sun-god.

The Egyptians may not have minded exactly which goddess was intended. Indeed, in the New Kingdom tale of the Return of the Distant Goddess (time of Tutankhamun), the aggressive goddess Sekhmet is changed into the gentle goddess Hathor by plying her with alcohol! Additionally the Egyptians commented on the dual nature of the female comparing her to the goddesses.

Much Egyptian literature presents the stereotypical passive woman, the good wife, or the active but dangerous temptress. Literature was written largely by men for men, so we may assume that these were male views of women, although in the case of stories, it is likely that they were publicly performed for both men and women. There are always exceptions: in love poetry women are shown as actively ensnaring the male, but this does not seem to be regarded as subversive or dangerous.
In texts, the quiet, obedient wife is praised. An Old Kingdom husband praises his wife in a tomb chapel inscription: ‘she did not utter a statement that repelled my heart; she did not transgress while she was young in life’. Another wife is credited as ‘one who speaks pleasantly and sweetens love in the presence of her husband’[i]. The Middle Kingdom Instructions of Ptahhotep advise: ‘love your wife with proper ardor, Fill her belly, clothe her back . . . . ’ [ii]. But they also say ‘Remove her from power, suppress her! . . . Restraining her is how to make her remain in your house; a female who is under her own control is rainwater’.

In the Middle Kingdom Instructions of Ptahhotep, the dual nature of women is described:

One is made a fool by limbs of faience
And then she turns into carnelian.

Here the woman is described as both ‘faience’ and ‘carnelian’. The positive and beautiful blue of faience turns into the aggressive and fiery red of carnelian[iii]. The Tale of the Herdsman may suggest, in the unclothed nature of the woman, that it is women’s sexuality that was feared. However, in the Middle Kingdom there are some positive associations of women, such as the princesses in the Tale of Sinuhe, reviving the hero through the shaking of sistra.

The danger afforded by women continues in New Kingdom literature. In the Instructions of Ani, a man is warned of women traveling alone:
A deep water whose course is unknown,
Such is a woman away from her husband.
‘I am pretty,’ she tells you daily,
When she has no witnesses;
She is ready to ensnare you,
A great deadly crime when it is heard.

In the Tale of the Two Brothers, Anubis’ wife attempts to seduce her husband’s younger brother, Bata, and Bata’s young wife betrays her husband. In Truth and Falsehood, a woman rescues Truth, but then treats him badly after sleeping with him[iv]. While men may also be shown in an unfavourable light, in Egyptian tales it is usually suggested that women accomplish sinister deeds through their sexuality.

The dual and dangerous nature of the woman continues into the Late and Graeco-Roman Periods. In the Late Period, the Instructions of Ankhsheshonk remark:

When a man smells myrrh his wife is a cat before him
When a man is suffering his wife is a lioness before him[v]
In the Graeco-Roman, The First Tale of Setne Khaemwes, a character called Tabubu seductively dressed in transparent linen, ensnares the hero and then mysteriously vanishes[vi].
Women are rarely shown actively engaged in any vigorous activity in tomb art, and they appear as passive partners to the male. This is even the case in the Old Kingdom, where it could be argued that women had more status than in later periods. Men are shown striding forward, while women stand with their legs closer together. The man always sits on the right (superior) side and the woman on the left (inferior) side[vii]. By tradition, women may cling to, or adore their active husbands, but in a study of 42 New Kingdom couples, only 2 show reciprocal gestures of affection. Men are central while women show them deference( Whale 1989; Robins 1994).

Women are also shown as passive in Old Kingdom fowling scenes and in one case a woman urges the male to get a bird for her. Usually, women stand by their husbands, who are actively hunting the birds Two unusual instances of women depicted alone in fowling scenes have been noted, but the woman’s role is ambiguous in both instances as she is described as ‘viewing’ rather than ‘performing’ the activity . The lack of active female roles in art may be because Egyptian tomb imagery used women largely as sexualized images, placed in supporting roles to men.
The apparently restrictive nature of women’s clothes, as shown on tomb paintings, may have been because they were expected to be less active than men. However, it could equally be true that these clothes were not tight and restrictive, but merely appear so in ancient Egyptian art because the typical wrap dress would have been shown two dimensionally. Certainly, actual Egyptian women’s clothing found in tombs is not restrictive, but rather sack-like.

To a certain extent, the passive/aggressive duality and positive associations of passivity extend to deities like WK42. There are aggressive goddesses, such as the creative and active Eye of Re. While such goddesses are not necessarily seen in a negative light, the story of the dangerous lioness goddess, Sekhmet, sent out on a killing spree by Re shows this goddess must be controlled and changed into the passive and beautiful Hathor if humankind is not to be annihilated. The connection between deities and mortal women is described in Papyrus Insinger: ‘the work of Mut and Hathor is what acts among women. It is in women that the good demon and the bad demon are active on earth’

Whale, S. (1989) The Family in the 18th Dynasty of Egypt: A study of the representation of the family in private tombs. Sydney: Australian Centre for Egyptology.

Posted by Carolyn Graves-Brown at 06:39