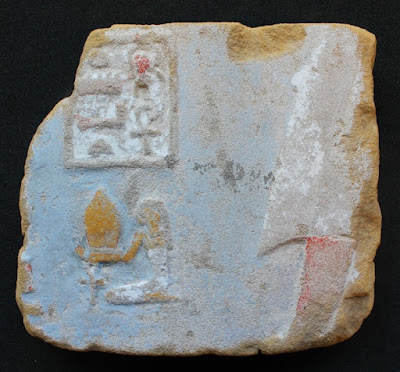 Sometimes museum enquiries seem time consuming and not at all useful to the museum. In fact, for this reason some museums have considered charging. We don't at the Egypt Centre, which is just as well as often our enquiries are interesting and lead to additional information about the collection.

We recently had a very useful enquiry which led me to look in a bit more depth at one of our objects and showed that we had catalogued it incorrectly.

W1371, picture above, had been incorrectly catalogued as coming from Deir el Bahri, of course it doesn't! This was pointed out to me by an academic researcher doing some work on Deir el Bahri, who was asking if we had artefacts from her site. It actually comes from Kurna, on the west bank at Luxor and is from the mortuary temple (the temple where offerings were given to the dead king) of Thutmose III. As it says in the square top left it comes from the Heneket-ankh (which means 'Offering Life'.

So, I looked into this a little more. I don't really know much about it. And, in doing so, learnt all about how temples on the west bank were altered to accommodate the increasing numbers of priests carrying the sacred barques (model's of boats in which statues of gods were carried) in procession. Well, obviously, if you have more people carrying the barque you have to widen the doorways. I also learnt about the excavations at the Heneket-ankh.

Then I revised the online information we have here on the actual piece.

So, thank you very much to our enquirer.
Posted by Unknown at 03:09