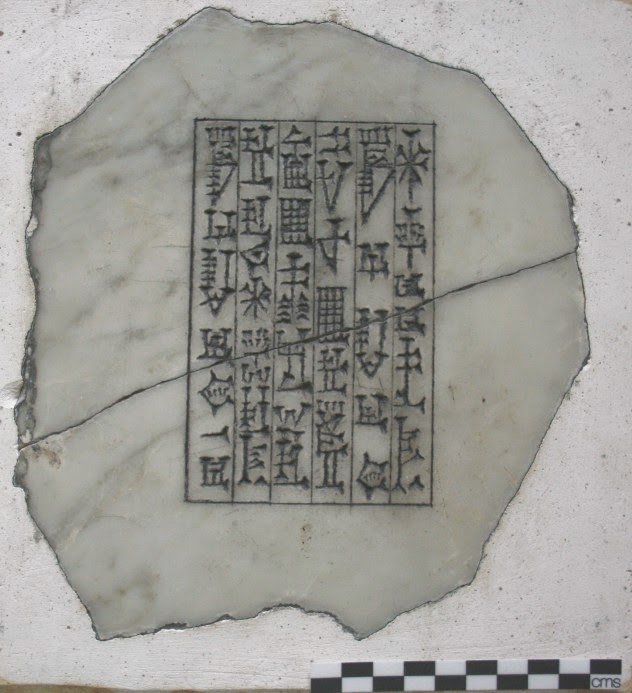 Did you know that the Egypt Centre at Swansea University has items which are not Egyptian? Yes most of the objects are Egyptian but we also have one or two which are not. I thought it might be good to highlight a few of these. As I am not an expert on them, I would be glad of any additional information.

So, to start we have this. A marble slab with cuneiform inscription written in Babylonian of Nebuchadrezzar II. It reads: Nebuchadnezzar, king of Babylon, provider for Esagila and Esida, eldest son of Nebopolassar, King of Babylon am I. Esagil and Ezida were the temple complexes of Babylonia and neighbouring Borsippa.

The same inscription can be seen on many of the thousands of bricks found at Babylon (now southern Iraq) which was excavated in the 19th century and upon stone slabs also used in building projects. King Nebuchadnezzar used such bricks in his official building projects.

The piece is set in plaster and is 20cm high. On the back of the plaster is written 'Encased by J.J. Sexton, London A.D. 1885/ Victoria Queen'.

Babylon is described by the Greek Historian Herodotus in about 485-425 BC. At the writer Berosus credits Nebuchadnezzar with the building of the ‘Hanging Gardens’ for his homesick Iranian wife. Nebuchadnezzar ruled from 605 to 562 BC.

The script on this is ‘cuneiform which was used to write a number of different languages. ‘Cuneiform’ means wedge-shaped’. Different versions of the script were used at different times.

Our volunteers get to handle this object next Tuesday on a session organised specially for them by Egypt Centre staff and led by volunteer Dulcie Engel.

If you want to see more of our objects, Egyptian and non-Egyptian, we have an online catalogue here: http://www.egyptcentre.org.uk/

Posted by Carolyn Graves-Brown at 05:12