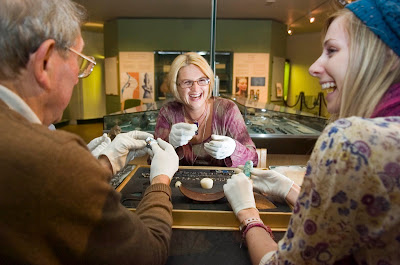 But have still been thinking about some of the things I learnt from CIPEG 2015. Something that came out time and time again was how in the early days of museums (what one might consider early varied from museum to museum), copies of masterpieces could be held to be more important than ‘second rate’ actual objects. Interesting and completely opposite to what I had hitherto believed. I always like the idea of the real object, even if grotty because of its magical contagion value. That’s why I got interested in ‘old things’ and ended up working in museums, because ‘old things’ are somehow linked directly to the past and can somehow transport you there. And of course, I have grown up in the modern western tradition with its emphasis on ‘authenticity’ (whatever that means). So, my take on plaster casts was that they may be beautiful but they are only real in so far as there post manufacture history is concerned. If they had value it was more to do with the recent past, perhaps as evidence for changes in what was considered important in Egyptology. Additionally, to be honest, I don’t know what masterpieces are. I believe others claim they have to be aesthetically beautiful and fairly rare? So a beautiful black-topped redware pot wouldn’t count as a masterpiece. What if it was an unusual shape?

But to return to the point, it seems that generally the real artefacts, even if common and ugly have gained more importance, particularly in the 20th century. So how and why did things change? Well, I have read some interesting stuff by Alice Stevenson. It can be accessed here. She shows how the partage system and Petrie’s distribution of finds to museums meant that the ‘grotty’ items, typical of most archaeological excavations, became increasingly valued. At CIPEG 2015 we learnt from Alice Williams (an ex- Egypt Centre volunteer now doing her PhD at Oxford :-) ) about how Petrie’s exhibitions of items in London were so well attended. Maybe these exhibitions too helped show ‘the general public’ what real excavated remains were like, that they were rarely masterpieces of ‘art’, but nevertheless of value.  Additionally too, one may expect that the increase in the belief in the importance of ‘science’ and technology, also meant that everyday artefacts were more valued.

But, I am wondering if there could be a class element to all this?  Could it be that the masterpieces were more inclined to be valued by those well-educated, elite individuals with the necessary training, those brought up learning the classics and appreciating art?

I am also thinking, should we make more use of our plaster casts? We only have a couple, but they are copies of famous things elsewhere. Should we use them in teaching? As CIPEG taught me, other museums do. Nika Lavrentyeva gave an excellent talk on the use of plaster casts in the Pushkin Museum. I’m not sure I feel so excited about copies as the real thing, but maybe that is a result of my background.